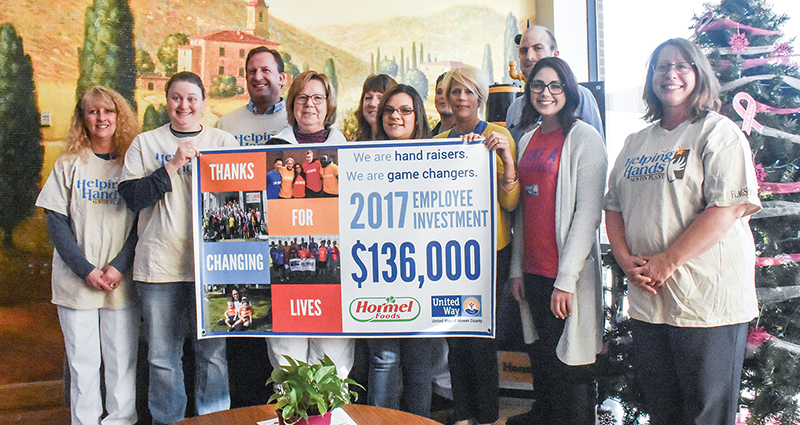 Employees of the Hormel Foods Plant in Austin raised $136,000 for the United Way of Mower County in 2017. Photo by Michael Stoll/mike.stoll@austindailyherald.com

Employees at the Hormel plant in Austin completed their 2017 fundraising campaign for the United Way of Mower County, raising $136,000.

Representatives from Hormel Foods Corporation and the United Way of Mower County met on Tuesday in the plant lobby to unfurl a banner commemorating the employees’ efforts.

“Fundraising is no easy task year after year, but the plant employees continue to be committed to the community through this effort,” said United Way of Mower County Executive Director Diane Baker. “They continue to be one of our strongest partners and this moves us closer to our goal and meeting community needs.”

“We do a lot of Power Point presentations to talk about what the United Way is, what they have going on, and what the money we raise is going to help out with,” he said.

The plant employees attempted to raise funds through means such as bake sales and basket fundraisers. Although the efforts fell short of the $150,000 goal, Salinas said this year marked the second best in participation from the employees, with 1,018 of the roughly 1,800 employees participating.

Plant Manager Clint Walters said plant employees are always looking to give back.

Walters is optimistic about the plant’s 2018 United Way campaign.

“Over the last couple of years we’ve learned about how we can raise money so hopefully we’ll have some ideas next year that will help us raise $150,000,” he said.

“It’s a great cause. The United Way is one of the many ways we give back to the community and we’re very proud to partner with the United Way each year.”

Baker said she believed the United Way of Mower County will reach its 2017 goal.

“The need continues to increase and it is more important than ever to reach that goal,” she said. “We’re going to keep after it and I’m confident we’re going to reach it.”