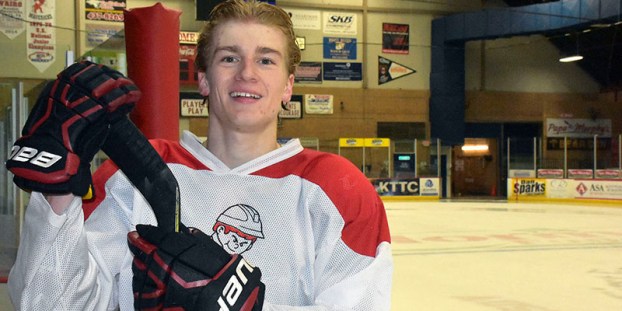 Dylan Svoboda is a senior hockey player for the Austin boys hockey team.

Q: What sports do you compete in?

A: I play hockey all year round. I also go to Crossfit Innerdrive for training throughout the summer until the season starts.

Q: How did you originally get into hockey?

A: When i was three years old, my sister was a figure skater and my parents would always have to carry me around during open skate. They eventually got me signed up for youth hockey and ever since it’s been a huge part of my life.

A: My favorite hockey memory was our winter tournament in Eveleth Minnesota last year. It was a great experience for the whole team and we played teams we have never played before. We met hockey hall of famer John Mayasich. The trip really brought our team together. My personal favorite memory was being selected to play in the Ted Brill Great 8 tournament. Coaches nominate one player to go and represent their section in a round robin tournament. It was an amazing experience playing against some of the best players in Minnesota. 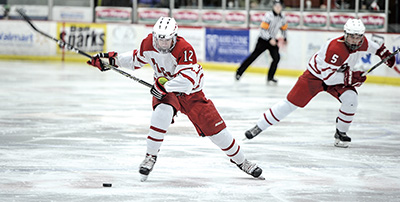 Q: What have you learned from sports?

A: Hockey has taught me so much in life. You never know when it can be your last shift, such as in life. But no matter how hard you get hit you must always get back up. I’ve built up a great work ethic over the years from my coaches and my teachers. I learned that nothing is ever given to you and if you truly want something in life you have to be willing to push yourself day in and day out on and off the ice.

Q: What is the hardest part about hockey?

A: The hardest thing about hockey has to be the unpredictability of the game. One bad bounce or one missed pass and the next thing you know, you lost the game. Hockey is a game of mistakes and whichever team can capitalize on more of those mistakes comes out on top. But the toughest part of that is how you personally handle it and how your team can overcome that loss. Hockey can make your dreams of playing in the big show come true or it can end them just as fast as it started. Which is why i love this sport, because of the unpredictability and the hard work it requires to keep chasing those dreams you had as a kid.

Q: Who is your biggest sports role model and why?

A: My biggest role model in hockey isn’t my favorite hockey player but someone who has been in my corner since my first game freshman year,Tommy Tauchnitz. Tommy played for Austin from 1985-89. He was the leading goal scorer his junior and senior year. Tommy taught me instead of going full speed every shift to slow the game down and control each aspect in the game. He watches my games and always has constructive criticism for me. Tommy also has been a huge motivator for me through high school by always reminding me that hard work does pay off. I’d also like to take this time to thank Tommy for always believing in me.

Q: What is your favorite movie or TV show?

A: Rick & Morty is by far my favorite Cartoon TV show.

Q: What is your favorite subject in school?

A: I really enjoy Anatomy & Physiology, I love learning about how our body functions.

Q: What is your dream job?

A: Any hockey player dreams of playing in the NHL for their career. I’d love to wake up in Vancouver one day and have a game against the Canucks then fly to California later that night to play against the Kings the next day. But if that doesn’t work out for me I’d love to open or co-own my own gym.

Q: What is your favorite food?

A: My favorite food is the Philly Cheesesteak Burrito from El Mariachi’s.

Q: What are your plans after high school?

A: I am hoping to receive more offers from junior hockey teams to continue my hockey career. Another option I have is continuing my education while playing for Iowa State University’s division ll men’s hockey team while majoring in Kinesiology.

Q: What’s a fun fact about you or hobby you enjoy most people don’t know about?

A: I started Crossfit about two years ago at Crossfit Innerdrive. I decided to join because in order for me to make the next big step in hockey I had to become stronger physically and mentally, and Crossfit strengthened both of those aspects of my game. It also showed me the importance of nutrition which is a huge part of both Hockey and Crossfit. Before Crossfit I was never interested in lifting weights for fun, but the coaches at Innerdrive made it enjoyable and I’ve been hooked since my first class! The family you join at Innerdrive is so welcoming. Everyone there wants to see you give it everything you got while cheering you on the whole time. Crossfit has taught me how to be a leader most importantly. I highly recommend Crossfit for anyone.

Q: What are your top three pump songs before a big game?

A: “Metronome” by Jauz. Any Gucci Mane song. And for the big games I prefer “Roll in Peace” by Kodak Black. Because it gets the boys jumping. The boys have trusted me with music privileges for years now.

Q: What are your top three guilty pleasure songs?

The Austin girls basketball team will host its ‘Pink Out’ game against Red Wing on Feb. 5. The game will... read more