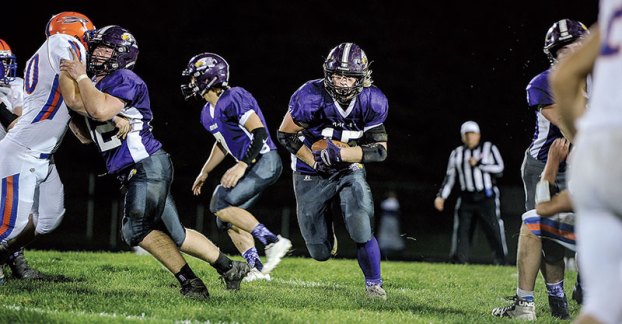 GRAND MEADOW — Grand Meadow has had a lot of success on the football field over the past six years and now it will likely have a three players on Division II football rosters next fall. GM senior Zach Myhre made his verbal commitment to play football at Winona State University under a partial athletic scholarship Wednesday night.

“I just felt like I fit in real well there,” Myhre said. “I like talking to their coaches and it felt right. It means a lot [to play at the college level]. I want to represent Grand Meadow. Nine man football kind of gets looked down on by bigger schools and it’ll be nice to prove those people wrong.”

Myhre, who ran for 2,162 yards and 28 TDs, while racking up 122 tackles this past season, will join his former teammate and fellow GM grad Landon Jacobson with the Warriors, who went 10-2 overall last season. Jacobson is a running back and Myhre is expected to play inside linebacker.

“I think it’s going to be fun playing with Landon again. I played with him a little bit my freshman year and I’ve talked to him some about going to Winona,” Myhre said.

Myhre has never shied away from a big hit on the football field and he’s excited about focusing his energy to the defensive side of the ball.

Myhre will also get a chance to compete against his former back-field teammate Christophor Bain, who plays at SMSU. Bain and Myhre important roles on three of the four state championship teams for GM.