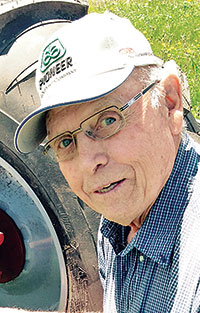 Duane was born in Brownsdale, Minnesota, on Oct. 8, 1932, to Earl and Angela (Guiney) Rolfson. He grew up in Brownsdale, where he attended country school until eighth grade. He then attended Queen of Angels for one year before transferring to Saint Augustine High School. Following his 1950 graduation from Saint Augustine High School, Duane attended and graduated from Austin Junior College in 1952. He was heavily involved in 4-H and Rural Youth. Duane was a great dancer who won an Arthur Murray waltz contest. In 1956, he was drafted into the U.S. Army. Following his honorable discharge in 1958, he returned to the Brownsdale area farm.

On June 10, 1961, he married Elna “Ellie” Erickson at Our Lady of Loretto Catholic Church in Brownsdale. They had two children who were very important to them. In 1990, he and Ellie moved to their current farm near Lansing, Minnesota. He loved spending time with his family, especially at Rolfson get-togethers and Erickson family reunions. He enjoyed visiting with his neighbors and friends, especially during morning breakfast at “The Knowledge Table” at Lake Geo. He was a member at St. Augustine Catholic Church. Among his favorite pastimes were farming, fishing at Crane Lake, and hunting. Duane was mechanically-inclined and repaired his own machinery. He was also an inventor of things to improve farm implements and their effectiveness. One of his inventions was the Row Guard, which he would showcase at irrigator conventions when his cancer prevented him from farming. He also attended antique tractor shows where he showed his father’s 1949 44 Massey. Some of his hobbies included attending auctions and sales as well as collecting and repairing Cushman Motor Scooters and Trucksters. He overcame many obstacles in life and he never gave up.

Survivors include his daughter, Tonja Rolfson (Brad Bystrom) of Lino Lakes, Minnesota; his son, Todd Rolfson of Coon Rapids, Minnesota; and Todd’s two children, Benjamin and Samantha Rolfson. He is also survived by many nieces, nephews, other relatives and friends. He was preceded in death by his parents, Earl and Angela Rolfson; wife, Elna Rolfson, in 2004; infant sister, Catherine Rolfson; and two brothers, Kenneth and Dean Rolfson.