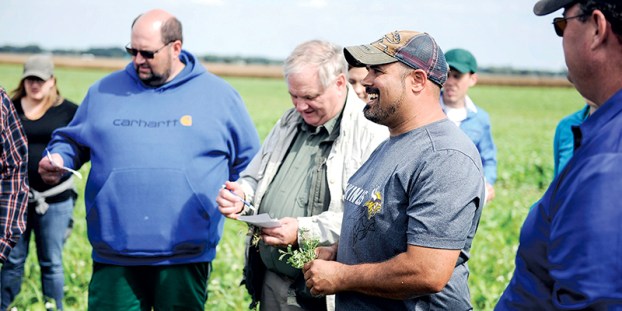 Tom Cotter takes a group of farmers through a field of cover crops west of Austin in 2016. Herald file photo

Getting started with cover crops on your farmland will be detailed Monday morning at a free class in Adams led by Austin-area farmer Tom Cotter.

“Cover Crops 101” will run from 10 a.m. to noon at the Adams American Legion Post 146 club along Minnesota Highway 56 at 321 W. Main St. It is open to the public and free pizza will be offered afterward at the Legion.

Mower Soil & Water Conservation District, which has led a soil-health initiative since 2015, is sponsoring the free workshop.

Cotter will join TJ Kartes of the Saddle Butte seed company in discussing cover crop seed origination, species and establishment before detailing a “Year One” cover crop plan. The duo first gave a “Cover Crops 101” class on Jan. 2 for about 20 people at the new Riverland Community College Center of Agricultural and Food Science Technology at its west campus in Austin.

Cover crops is an agricultural practice gaining interest in southern Minnesota and beyond as an option to help farmers with their operation as well as the water quality of local streams. Cover cropping involves planting a second, unharvested crop in coordination with regular cash crops, such as corn and soybeans.

“Farmers are interested in cover crops but quality information about them is limited in our area,” Cotter said in a press release. “This is the first step that will show them the methods that have been effective for us.”

A fourth-generation farmer in Austin Township, Cotter gave a presentation this past week at the 26th annual National No-Tillage Conference in Louisville. His talk was titled “Get out of the Rut by Adding No-Till Vegetables, Interseeding Covers in a Cold Northern Climate.”

In 2017, Cotter and area farmer Tom Finnegan were Cover Crop Champions under a grant awarded to Mower SWCD for outreach work. Cotter also was Mower SWCD’s 2016 Outstanding Conservationist with his father, Michael.

“Cover cropping is a journey I’ve been on for many years,” Cotter said. “I had felt alone until I joined local soil health teams and realized there are other like-minded farmers out there.”

Mower SWCD soil scientist Steve Lawler has worked extensively with Cotter in recent years through a Mower Soil Health Team, which likely will have several members attend the Jan. 2 event. Members of the team have working knowledge of cover cropping and reduced tillage systems and are committed to providing one-on-one outreach to other area producers seeking to learn more about those and other management practices.

Stormwater flow likely would be reduced by 30 percent in Dobbins, according to the study, with best-management practices implemented in critical areas along with 30 percent of its farmland getting year-round vegetative cover, including crops, cover crops and post-harvesting residue.

Austin Bruins pick up fourth straight win in a shootout

The Austin Bruins picked up their fourth straight win when they edged out the Brookings Blizzard (14-7-2-2 overall) 3-2 in... read more