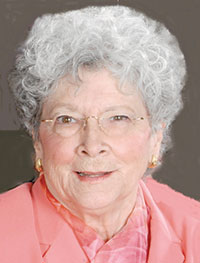 Carol Ann Lechnir was born Dec. 24, 1933, in Minneapolis, Minnesota, to Ernest F. and Mae A. (Pooler) Lechnir. Carol attended Austin Public Schools, graduating from Austin High School in 1951. On Feb. 20, 1955, she was united in marriage to David N. King.  The couple were blessed with one son and two daughters and made their home in Austin. Carol enjoyed her role as wife, mother and homemaker. She belonged to St. John’s Lutheran Church and was active in the LWML, the United Support Group, and the Fairview Cemetery Auxiliary. David passed away on March 11, 2017.  In her spare time, Carol loved to read, knit, and solve crossword puzzles. She considered her family, friends and her life all precious gifts from God. Carol will be dearly missed by all whose lives she touched.

A funeral service will be held at 11 a.m. on Tuesday, Jan. 23, 2018, at St. John’s Lutheran Church in Austin with Pastor James Groleau officiating. Interment will follow at Fairview Cemetery, Oakland, Minnesota. The visitation will take place from 4-6 p.m. on Monday, Jan. 22, at Worlein Funeral Home and one hour prior to the service at the church on Tuesday. Memorials can be directed to St. John’s Lutheran Church or recipient of donor’s choice. Services prearranged and performed by Worlein Funeral Home of Austin. Condolences may be expressed to the family online at www.worlein.com.