Barbara J. Hautt-Erickson, 76, of Stewartville, Minnesota, died on Friday, Jan. 12, 2018, following a lengthy illness with cancer at the Stewartville Care Center, where she had been a resident since November of last year. 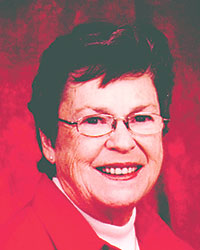 Barbara Jean Studer was born on July 30, 1941, in rural Brownsdale, Minnesota, to Ray and Leota (Lowe) Studer. She grew up in rural Brownsdale, attended school there and in Austin, Minnesota, graduating from Austin High School in 1958. She was married to James Hautt on Aug. 3, 1958, in Dexter Township, Minnesota. Following their marriage, the couple lived in Heartland, Minnesota, where Barbara was a homemaker and was self-employed as a seamstress who sewed and made alterations on many wedding dresses. They were later divorced. Barbara was married to Clester Erickson on June 20, 1969, in Northwood, Iowa. They lived in northern Minnesota, where they owned and operated Erickson Birch Haven Resort in Hackensack, Minnesota. They were later divorced. Barbara moved to Stewartville in 2002, where she could live closer to her family. She was a member of St. John’s Lutheran Church in Stewartville. She enjoyed sewing, crocheting, fishing and was a Minnesota Twins fan. She loved time spent with her family, especially her grandchildren and great-grandchildren.

A funeral service will be held at 11 a.m. on Saturday, Jan. 20, 2018, at St. John’s Lutheran Church in Stewartville with the Rev. Lyle Fritsch officiating. Burial will follow at Woodlawn Cemetery in Stewartville. A time of visitation for family and friends will take place from 5-7 p.m. on Friday, Jan. 19, 2018, at Griffin-Gray Funeral Home in Stewartville and one hour prior to the service at the church on Saturday morning.

Arrangements are with Griffin-Gray Funeral Home.

Peggy Ann Tollefson, 78, passed away and was reunited with the love of her life of 48 years on Sunday,... read more