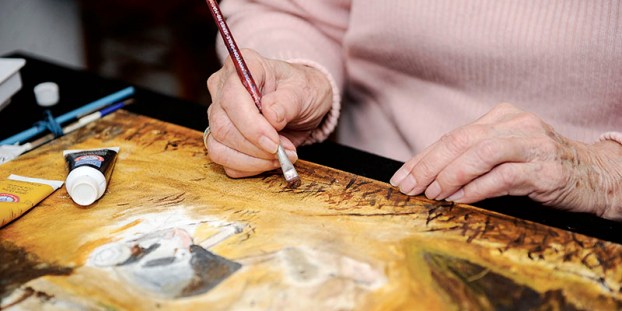 Mary Wolcott paints in some detail on one the paintings she’s working on. Eric Johnson/photodesk@austindailyherald.com

Walking into the Austin home of Mary Wolcott, it is apparent that you’ve stepped into the house of an artist.

Fresh off of a sale held at her home, Wolcott had several paintings and many pieces of jewelry that she was still in the process of putting into storage out on display at the time this article was written. Each painting showed particular attention to detail, while each piece of handcrafted jewelry was unique.

Wolcott, who has lived in Austin her whole life (“I won’t tell you how many years,” she joked), keeps herself busy with art and jewelry making.

“I first took an art class from Jim Wagner and that’s how I started,” she said. “When I was in school and I stayed with a friend, she had paper and I just started drawing people. Nobody directed me; I just did it.” 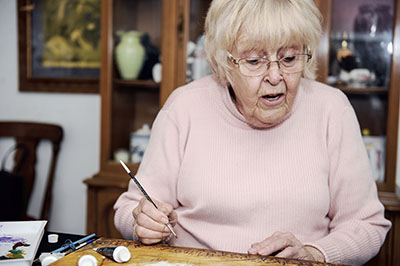 Mary Wolcott looks over where to go next as she works on one of her paintings. Eric Johnson/Austin Living

After that, Wolcott dabbled in different types of artistry.

“I like to try a lot of different things,” she said. “I’ve tried oil, acrylic, pencil-drawings – I’ve done two pencil drawings of my grandkids that look just like them – and I started doing all of this other stuff.”

Wolcott says she is not a big fan of doing landscapes. Her preferred medium is oil paint, and her preferred work is portraits.

“I do portraits from a small photograph or a picture from National Geographic and I really do it inch-by-inch,” she said. “Most people just splash the paint, but I don’t.”

Hanging on the wall of her home is a portrait of a young woman.

“That’s one of my mother that I did about three or four years ago from a little tiny painting of when she was 20 years old,” she said. “My daughter wants me to paint a picture of myself. We’ll see.”

One such portrait caught the attention of a stranger.

“A long time ago I did a painting of Red Skelton in his clown outfit and they were having a sale at the Holiday Inn or the Red Cedar Inn, I can’t remember which one,” Wolcott recalled. “Some guy bought it for $35. He was from Chicago. I had never met him or anything. I wasn’t proud of the painting, but it looked just like him.”

Wolcott estimates that she’s done anywhere from 20 to 25 paintings.

On the kitchen table were several pieces of jewelry from her previous sale.

“I had two or three tables full and the kitchen table full of jewelry,” she said. “I made most of it; there were a couple of antique necklaces I didn’t make. I used to work in an antique shop (Kingsley House) for 14 years. It’s not in business any longer. They’ve been out of business for quite a few years. It was down a block from Main Street.”

Wolcott’s interest in making jewelry came from a friend’s shop.

“It started out as a fun thing and now I just keep doing it,” she said. “I’d go to Colorado and pick up the stuff. I had a friend that had a shop in Colorado. She had some Indian jewelry and one was called a fetish. It has birds and animals on it to ward off evil spirits.”

“It never warded off any of mine,” she added with a laugh.

Wolcott prefers to use stones when making her jewelry. 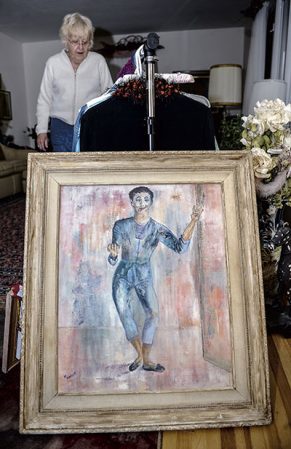 This painting of a clown is Mary Wolcott’s first painting. Eric Johnson/Austin Living

“I like the turquoise,” she said. “I use real coral turquoise, jasper, sterling silver. I’ve made some glass pieces, but mostly stones. To me they’re better than glass.”

Since she began making jewelry, Wolcott has sold approximately 50 pieces.

“I used to go to craft shows, such as one in Blooming Prairie and one at the high school,” she said. “I don’t sell my items that often anymore. It takes a lot of energy and I’m running out of energy. You can only have a little spot and I think I have too much. That’s why it’s easier to have (sales) here (at home). I do much better here. I usually have ones like this twice a year.”

Although she does not take special requests, Wolcott does repair jewelry.

But when she isn’t painting, making jewelry, or dancing with the Austin Cotillion Club, Wolcott is busy knitting hats and decorating jackets.

“I used to knit a long time ago,” she said. “When my kids were little, I’d knit their sweaters for school. Then I kind of quit. I got to play golf and got to play Bridge. Now, I go to a knitting meet at the senior center and we all make something. I’ll also buy jackets and decorate them, maybe hand paint something on them.”

“I’ve got to quit the jackets though,” she added. “They take up a lot of space.”

Wolcott sells her hats, but also gives some to a good cause.

“I’ve given a couple of hats to my friends that had cancer,” she said. “Pretty soon I’m going to give more away.”

When it comes to her hobbies, Wolcott has no plans to stop.

“It’s fun doing it and I’m just going to keep on doing it,” she said.