Woman wanted in Steele County gets drug charges in Mower 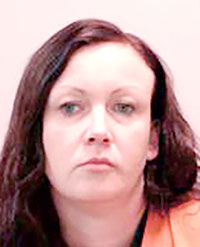 According to the court complaint, an officer stopped a 1996 Nissan Maxima at 8:51 p.m. on Tuesday in the 1300 block of Fourth Street Southwest because it was registered to someone with a suspended license.

He recognized the front seat passenger, Gomez, despite her trying to hide her face by looking down and using the bill of her cap. The driver lied about the passenger’s name to the officer and then admitted he lied because he thought she had warrants, the complaint said.

Gomez had a warrant in Steele County.

The officer searched the vehicle and allegedly found the following under or near the passenger side seat:

• a red bag that contained 8 ½ grams of marijuana and a drug ledger,

• a second drug ledger, and

• a black backpack containing three hydromorphone pills and a scale with residue.

The driver said all of the drugs belonged to Gomez and he knew she had them, according to the complaint. He allegedly said she tells him where to drive and they both use methamphetamine.

Gomez allegedly told the officer the drugs belonged to her.

The warrant from Steele County was issued after she failed to appear at a hearing in September. She is awaiting sentencing for a felony third-degree possession of three grams or more of cocaine/heroin/methamphetamine conviction in Steele County.