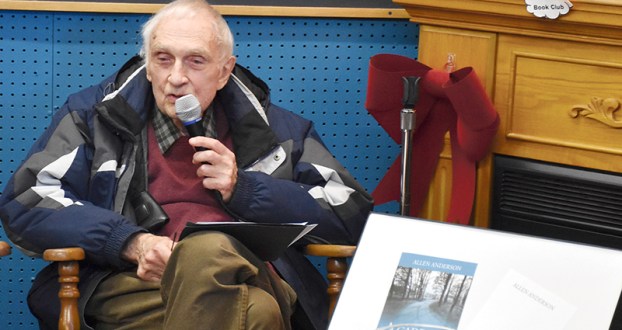 Author Allen Anderson talked about his book “A Caddie’s Experience” on Wednesday at Sweet Reads. Photos by Michael Stoll/mike.stoll@austindailyherald.com.

At 85 years old, Allen Anderson has a lifetime of stories. A graduate of Austin High School, class of 1951, Anderson served two years in the U.S. Army before getting degrees in sociology and history. He worked several jobs, the longest being 30 years with the Minneapolis Public Schools.

But his adolescent years were spent working as a caddie in the 1940s at the Austin Country Club, and he shares his experiences in his recently published book, “A Caddie’s Experience.”

“I never would have dreamed 66 years ago when I graduated from Austin High School that I would be here talking about my book,” Anderson told a small crowd on Wednesday during an Author Meet and Greet event at Sweet Reads. Present at the event was his brother, Ron, who also caddied at the Austin Country Club.

Anderson, who turned to books to cope with the death of several family members killed in a car accident in 1946, has published one other book, “Abraham to Isaac.”

In “A Caddie’s Experience,” Anderson shares stories and anecdotes from when the Austin Country Club had only nine holes.

“One of the things the caddies would do when we had a flood was go swimming, and that current would take us far out,” he told the crowd. “Back then, five of the nine holes were water holes, which was unusual at the time. Every time we had a big rain it would flood.”

During one such flood, Ron struck his head on a hard object while diving. They had to take him back to the clubhouse to stop the bleeding. Their boss, Bob Carlson, was so disappointed with them that he fired Ron.

“Ron wasn’t happy about it,” Anderson said. “Bob told him he would give him a ride home, but Ron didn’t want to ride home with a man
who just fired him, so he walked home.”

Anderson also recalled how golfers shared their love of the game with the caddies.

“The members of the Country Club were very generous in letting caddies learn the game,” he said. “They launched ‘Caddie Day,’ which they held twice a week, and they would let us use their golf clubs.”

Of course, the caddies always wanted to work for the members that tipped the most.

“We caddies knew which golfers tipped best,” Anderson said. “But, you were assigned by when you signed in.”

At the time, caddies made 50 cents per nine holes, plus tips. Whenever the Mower County Fair was in town, the caddies would save their money and ride every ride at the fair.

“(A Caddie’s Experience) was an enjoyable recounting of my adolescent days,” Anderson said.

Best Bets: Austin ready to ring in the New Year

As 2017 comes to a close, there are many events that will allow you to ring in the New Year... read more