StarWatch: Look up for the super month of January

January starts and ends with full “supermoons”—one on New Year’s Day and one on the 31st.

On New Year’s Day we get the closest full moon of the year—a mere 221,700 miles away. Perfect fullness comes at 8:24 p.m.—less than five hours after both moonrise and perigee, the moon’s closest approach to Earth in a lunar cycle. In other words, 2018 starts with a rising moon that scores way up on the size, brightness and roundness scales. During the night of the 1st-2nd it travels the sky in Gemini. 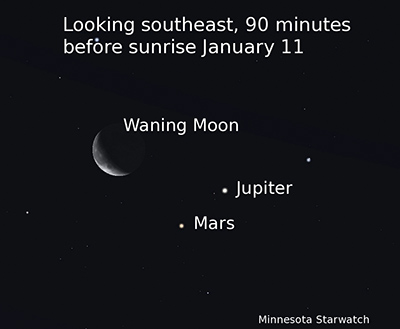 On the 31st, the moon reaches fullness at 7:27 a.m. It also undergoes a total lunar eclipse. Totality begins at 6:52 a.m., followed by the moment of deepest eclipse at 7:30 a.m. and the end of totality at 8:08 a.m. Unfortunately, over the eastern part of the state this supermoon sets before or very shortly after the deepest eclipse. Still, the eclipse will deliver more than enough for a great early-morning show. This full moon also meets one definition of a “blue moon”: the second full moon in a calendar month.

The morning sky continues to outdo its evening counterpart in terms of planet watching. Early in the month, Saturn slips over the southeastern horizon and climbs higher every day.

Jupiter begins the month high in the southeastern predawn sky, just to the lower left of Mars. But the king of planets is about to overtake the god of war. On the 6th and 7th, watch brighter Jupiter climb past Mars, coming barely half a moon width from the red planet. On the 11th, a waning crescent moon visits the planets, which will then be about two degrees apart. Southeast of both planets, Scorpius and its gigantic red heart, Antares, are rising.

Another bright red star shines in the east after nightfall. That is Betelgeuse, at Orion’s northeast shoulder. Grab your binoculars and find the sword hanging from the three stars of Orion’s belt. The sword’s middle “star” is the Orion Nebula, an immense region of multicolored gas and dust clouds where young stars are forming at a breakneck pace.

Also turn those binocs on the V-shaped Hyades star cluster, which forms the face of Taurus, the bull.

It’s just northeast of Orion and marked by orangeish Aldebaran, the eye of the bull. Aldebaran isn’t part of the Hyades cluster, however. The Hyades are about 150 light-years away, while Aldebaran is a foreground star some 65 light-years from Earth.

Moving northeast again, the lovely Pleiades star cluster—also known as the Seven Sisters—is another delight for the eye.

Like the Hyades, the Pleiades are an open star cluster. In open clusters, the stars were all born around the same time and are traveling through space together.

The Wide Angle: Forecast calling for Sunfire degrees into the weekend

Ahhh, Minnesota. You never disappoint. I’ve lived in this state for most of my life, excluding the several years where... read more