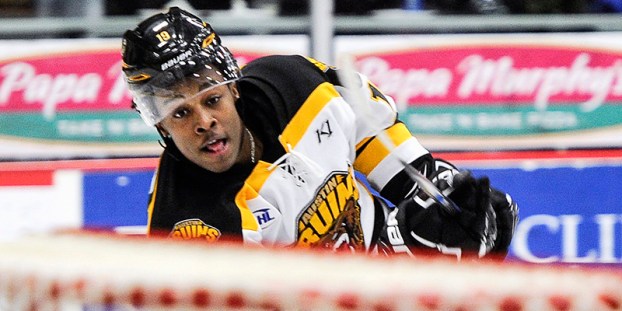 Second period funk slows down Bruins in loss to Wilderness

The Austin Bruins let a fast start slip away as they lost to the Minnesota Wilderness (16-12-2-1 overall) for the third consecutive game in a 4-3 shootout loss in Riverside Arena Friday.

The Wilderness picked up the the shootout win when Gino Lucia and Eric Gotz scored. Dominic Skrelja had the lone goal in the shootout for Austin. 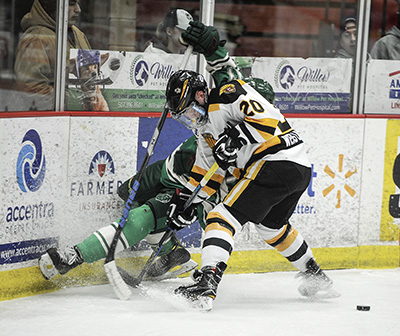 The Austin Bruins Jaden Shields gets the check against the boards against the Minnesota Wilderness Friday night at Riverside Arena. Eric Johnson/photodesk@austindailyherald.com

“I don’t think they played very well in the first and their coach probably got on them,” Austin head coach Steve Howard said. “We knew they were going to come out hard and heavy. Unfortunately on those two power plays, we were scrambling and we didn’t look organized.”

The Wilderness took a 3-2 lead with 7:11 left in the third when Ondrei Trejbal scored a goal, but Austin’s Travis Kothenbeutel scored just 19 seconds later on a one-timer from Garrett Dahm to force the extra session. Austin out-shot the Wilderness 5-1 in the three-on-three overtime period. 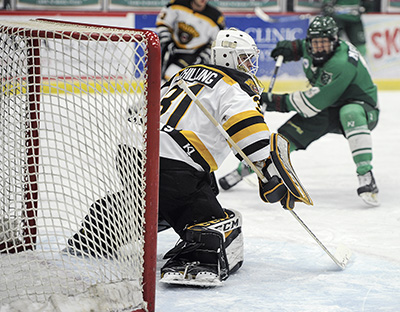 Austiin goalie Alex Schilling looks for the puck during the first period against the Minnesota Wilderness at Riverside Arena Friday night. Eric Johnson/photodesk@uastindailyherald.com

“The third period was kind of back and forth, in the overtime we just couldn’t find the back of the net even though we had a few really good chances,” Howard said. “I didn’t mind it, but we’ve got to play sixty minutes and we’ve got to erase the second period. Our power play has to go out there and get it done.”

Alex Schilling, who has committed to Air Force, stopped 27 shots for Austin.

“He’s playing good hockey and we’ve got to use him again tomorrow [at Cloquet],” Howard said. “Hopefully he’s got enough fire under his behind to go out there and help us get that win.” 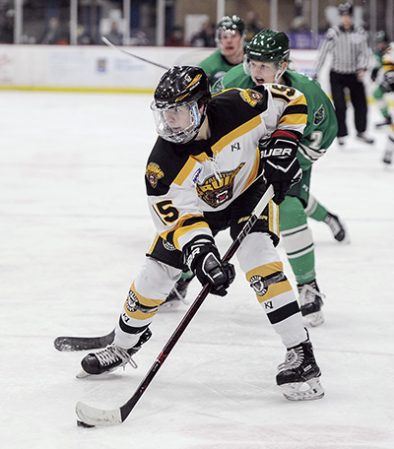 Austin’s Garrett Dahm skates the puck to the net during the second period against the Minnesota Wilderness Friday night at Riverside Arena. Eric Johnson/photodesk@austindailyherald.com

The No. 8 ranked Austin boys basketball team picked up a big win when it knocked off Lakeville North (7-2... read more