A man who was arrested on Monday after his alleged victim told someone at Lake Geo Truck Stop in Dexter to call 911 appeared on Wednesday in Mower County District Court. 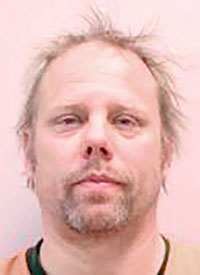 According to the court complaint, a Minnesota State Patrol officer responded a call at 12:29 p.m. Monday from the Dexter BP Lake Geo Truck Stop. He was told that a woman in a red pick-up truck had been in earlier and said she was afraid of the man driving it. The officer was given the license plate number, which came back to a residence in the 28000 block of 640th Avenue in Sargeant. When the officer arrived at the home, a woman answered the door and mouthed, “Help me.” The officer then asked to speak to Sanvick. When Sanvick came outside, the woman locked the door. The Grand Meadow police chief and a Mower County Sheriff’s Deputy also arrived later.

The woman told the law enforcement agents that she found Sanvick early Monday morning crying in his garage with a shotgun next to him, according to the complaint. She hugged him to console him, but when he hugged her back, he refused to let go. A struggle ensued, and Sanvick allegedly got on top of the woman and strangled her until she started “blacking out” and “seeing stars.”

She said Sanvick told her to get on her stomach, to which she told him no, according to the complaint. Sanvick told her that if she kept fighting him, she wouldn’t make it through the day. He then zip tied her legs and “hog tied” her ankles to her hands behind her back. She said he attempted to tape her mouth shut, but it wouldn’t stick because she was crying. She also said he told her he would kill himself at the end of the day.

Sanvick left her on the floor in the garage, returning twice, according to the complaint. When he came back the second time, he cut the zip ties on her legs and told her they were getting into the truck. She saw there was duct tape in the truck and she believed he had the shotgun with him. She said that he drove her to a nearby pond. Along the way, she said he poked her in the eye and threatened to cut her eyes out with a pocketknife so she couldn’t “see her kids grow up.” While at the pond, he allegedly physically and sexually abused her.

Sanvick then took her back to the house and sexually abused her again, according to the complaint. She told law enforcement that she was trying to cooperate with him because her youngest child, a four-year old, was still in the house asleep and she was afraid he would harm the child.

She said she was able to convince him to take her and the child to the Lake Geo Truck Stop because she needed more cigarettes. She planned to grab the child and run behind the counter when they got there, but decided against that when he told her he had three guns in the truck. When she went inside, she came across someone in the aisle and whispered, “Please call 911.”

Sanvick will appear in court again on Dec. 27.

The Austin Salvation Army is mounting a last-minute appeal to the community in hopes of closing the gap between lagging... read more