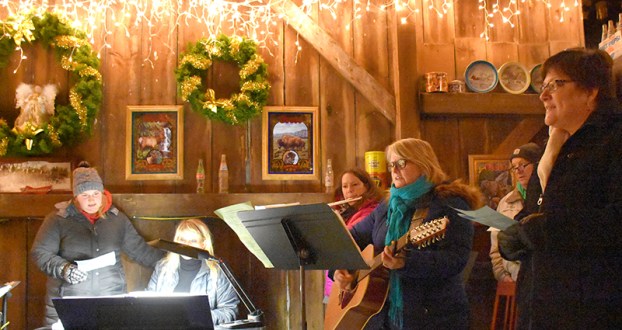 Members of the Johnsburg choir lead in one of the hymns at the Christmas in the Barn event held Sunday at the Jill and Kevin Sathre farm near Adams. From left, Ella Noterman, Sue Finbraaten, Janet Smith, Maureen Noterman and Laura Freund. Photos by Deb Nicklay/deb.nicklay@austindailyherald.com

Plenty of room in this barn; Community Christmas gathering draws more than 200 in 2nd year

ADAMS — Under the barn’s vaulted ceiling, strung with garland and miniature lights, neighbors gathered to spend an hour celebrating the season with friends, good music and warm coffee.

Some might not view a barn as a church. Vintage Pepsi bottles and a sign that said, “Sathre for State Legislature” were posted on the walls of the barn, and there were a few deer heads that watched the event from on high.

So, no, not a church — but its feeling of community made it come darn close.

This was Christmas in the Barn, held Sunday for over 200 who gathered on the second floor of the Kevin and Jill Sathre barn, just outside of Adams.

On one side of the barn was a huge Christmas tree decked in white lights. Someone brought a portable piano. Off to the side, big wooden cable spools were given tablecloth treatment, in case someone needed a place to set down their cookies and apple cider. 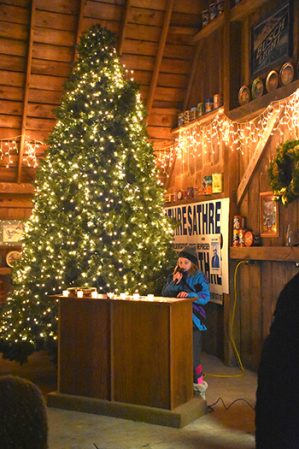 Brynn Sathre reads a portion of the Christmas story, during the Christmas in the Barn event Sunday at the Jill and Kevin Sathre barn near Adams.

There was hot cocoa, too, and that was a good thing. For those who did not attend last year and did not think about wearing gloves, holding on to the cocoa warmed chilled hands. Two big heaters were stationed to offer some warmth; some attending wore their snowmobile suits.

Through all of it, there was Christmas cheer, heightened with hymns of the season, led by the Johnsburg choir; and heartfelt when youngsters from the area read Bible passages that told of Jesus’ birth. And since it is the season of giving, the only entry “fee” to the barn was to bring a can of food for the local food bank. The stacks of canned goods grew by the minute.

There was children’s time as well, led by Sandy Johnson whose husband, the Rev. Jeremy Johnson, is pastor at Little Cedar and Marshall Lutheran churches in and near Adams.

Sandy Johnson, who served as emcee for the evening, kept the crowds and kids laughing with her cockeyed version of what happened at the nativity. The kids had fun correcting her when she referred to Joseph as “Jo-Jo” and said the Three Wise Men must have used GPS to find the stable. The kids yelled back “No! They followed a star!” as the audience chuckled. 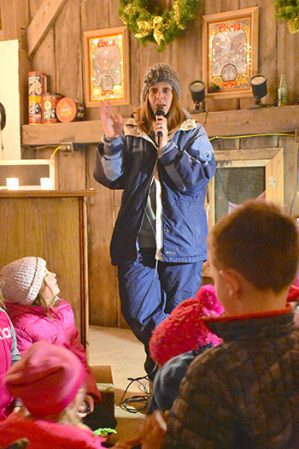 Sandy Johnson leads children’s time during the Christmas in the Barn event Sunday at the Jill and Kevin Sathre barn near Adams. Johnson gave an odd — and hilarious — version of the Christmas story, which was corrected by the kids as she told it.

“(The event) is important, because it brings our community together,” said Freund. “We’re all neighbors” who work together and go to school together.

“So, it’s nice to have an activity like this that is faith-based,” she added.

The Adams commitment to its community and wanting to celebrate “the true meaning of Christmas is amazing,” said Sandy Johnson.

Jill Sathre agreed, noting there were more this year who attended the event than in its inaugural year. It began last year when Sandy Johnson, who likes to have speciality services (she has also held a campfire service), asked the Sathres, who belong to Little Cedar, if they would host the Christmas event.

Sathre said she is pleased with the result. “It’s nice having people of all faiths coming together.

“It is a nice, seasonal thing,” she said. “Everyone seemed to enjoy it — and I think it was a really beautiful way to usher in the Christmas season.” 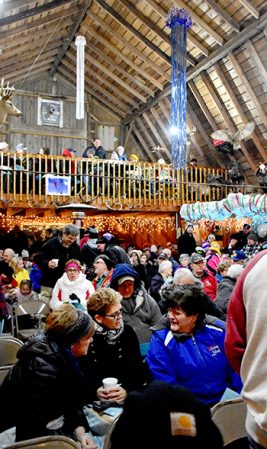 About 200 gathered at the Jill and Kevin Sathre barn near Adams on Sunday for the second annual Christmas in the Barn event. Neighbors gathered to sing Christmas carols, hear the Christmas story, and to enjoy some refreshments

When walking through the doors of Banfield Elementary School in Austin during the past week, one would assume it also... read more