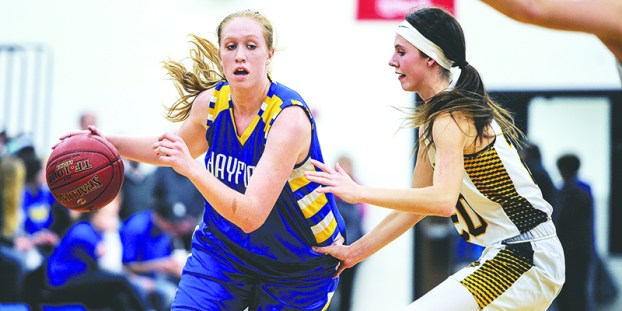 HAYFIELD — Some athletes look to college or professional sports to find their sports role models, but Hayfield’s Kate Kruger found her role model a little closer to home.

Kruger, a senior, grew up following the footsteps of her older brother Cole and now she’s matched one of his accomplishments.

Cole, who graduated from Hayfield in 2014, finished his career first in assists in Hayfield boys basketball history and second in scoring. After recording her 297th career assist for Hayfield on Tuesday, Kate moved into first all-time for career assists for the Vikings girls basketball team, surpassing Dani Wagner.

Kate grew up watching Cole, who went on to play college basketball at Upper Iowa and the University of St. Mary’s, from the stands and she was on hand when his team advanced to the Minnesota Class AA Boys State Basketball Tournament in 2014.

“I went to all of his games growing up and those are some of my best memories,” Kate said. “Maggie [Streightiff] and Carrie [Rutledge] would be there too and we hung out at tournaments and watched our brothers play. I look up to my brother a lot in seeing what he’s done.”

Streightiff reached her 1,000th point for the Vikings on Tuesday and she was quick to credit Kate and what she brings to the Vikings on a regular basis.

“Kate really sees the court well,” Streightiff said. “She runs everything and she gets us going. She also does the dirty work and she can pass and score. She’s someone that we really need on our team.” 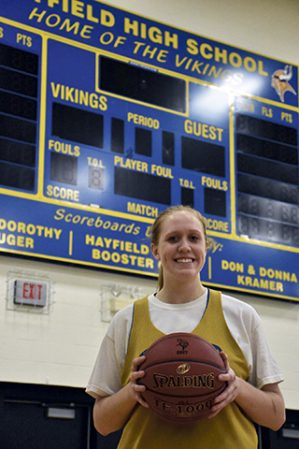 While her position may be point guard, Kate does a lot of things for Hayfield, currently ranked fifth in Class A. Co-head coach Kasey Krekling said that Kate is responsible for bringing the ball up the court, running the offense, guarding post players and perimeter players, and even posting up herself sometimes. She is also one of the top rebounders for the Vikings.

“She’s invaluable,” Krekling said. “She’s strong and she can make any pass that we ask her to make.”

While she’s certainly capable of scoring, Kate is content with being the table-setter on a team full of playmakers. She’s always looking to find an open shooter or a cutter, who’s headed towards the hoop.

“It helps that I have the teammates that I have. They can shoot so I can do other things. They run the floor well,” Kate said. “We’ve played together so long, we know each other so well and it’s so fun. No one’s selfish. Olivia [Matti] scored 28 points last night and nobody’s sad because they didn’t get their points. They’re happy for her.”

Matti said Kate is the perfect player to run the Vikings’ offense.

“When you’re cutting to the basket and you’re open, you can expect that she’ll see you. She has the best court vision,” Matti said.

The attitude Kate has taken to the court has been infectious for the Vikings, as the team has shared a great bond this winter. Although players like Kate and Streightiff are setting milestones, there hasn’t been a bit of jealousy amongst their teammates.

“We’re all supportive of each other and we all want each other to do well,” Matti said. “Everyone’s happy for everyone.”

As expected, the Austin School Board on Monday unanimously approved a 2.04 percent increase to its property tax levy, payable... read more