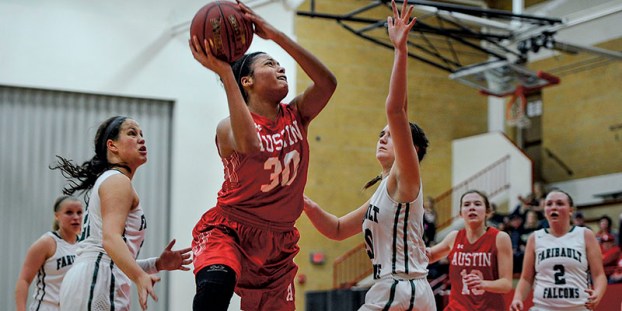 Austin’s Kiwi VanZant shoots in pressure during the first half against Faribault Friday night at Ove Berven Gym. Eric Johnson/photodesk@austindailyherald.com

When the game was on the line and the pressure was cranked up, the Austin girls basketball team kept its cool and executed as it was able to beat Faribault 50-47 in Ove Berven Gym Friday.

The Falcons (4-3 overall, 3-2 Big Nine) had clawed to within 42-41 after they scored five straight points, but Austin sophomore Kyra Walters settled down, drove baseline and kicked it out to Chloe Sheehan, who drilled a corner three-pointer to put the Packers up 45-41 with 1:35 left in the game. Faribault got no closer than two the rest of the way. 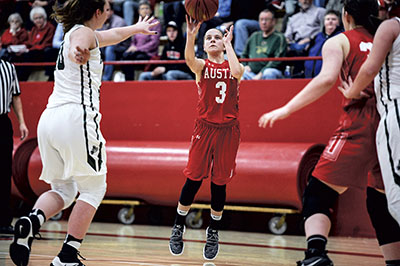 Austin’s Emma Dudycha shoots off the dribble against Faribault in the first half Friday night in Ove Berven Gym. Eric Johnson/photodesk@austindailyherald.com

Sheehan was coming into the game fresh off the bench and it was her first three-pointer of the year.

“It felt great. We worked on that pass from the baseline a lot in practice. I had to block out the situation or else I’ll get distracted,” Sheehan said. “It’s a huge win for us. We haven’t beaten Faribault in awhile. Everyone’s playing their role.”

Austin head coach Eric Zoske said he has faith in Sheehan as a shooter and he liked how his team responded with the game on the line. 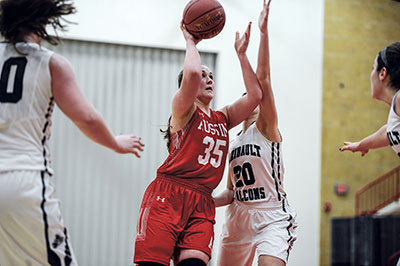 Austin’s Kyra Walters shots in traffic in the first half against Faribault Friday night in Ove Berven Gym. Eric johnson/photodesk@austindailyherald.com

“Chloe’s a really good shooter and it’s only a matter of time for a kid with that talent to see one go in,” Zoske said.

Emma and her twin sister Hope, who are both eighth graders, played some solid defense for the Packers in the second half as they made their run. 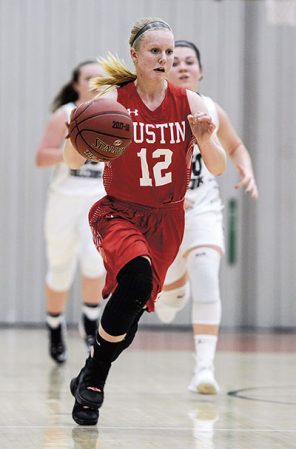 Austin’s Chloe Sheehan pushes the ball up the court against Faribault in the first half Friday night in Ove Berven Gym. Eric Johnson/photodesk@austindailyherald.com

Austin senior guard Emily Hegna, who had 10 points and four rebounds, said the middle schoolers are holding their own.

“We knew it was all on defense. We just needed to communicate, work together and stay positive,” Hegna said. “The whole bench is doing a great job and both [Dudycha’s] are really mature.”

Kiwi Van Zant added 12 points and six rebounds for the Packers, and she came up with a key offensive rebound that allowed Sheehan to knock down two free throws that made it 49-45 with 17 seconds left.

“We set the precedent for ourselves to close games out and find a way to win,” Zoske said. “Tonight all nine girls who played did a phenomenal job. All nine did their job and there’s no job too small. Kiwi Van Zant did a phenomenal job of the bench and Hope and Emma Dudycha played most of the second half and they played well beyond their age.” 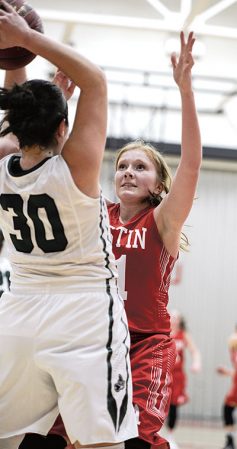