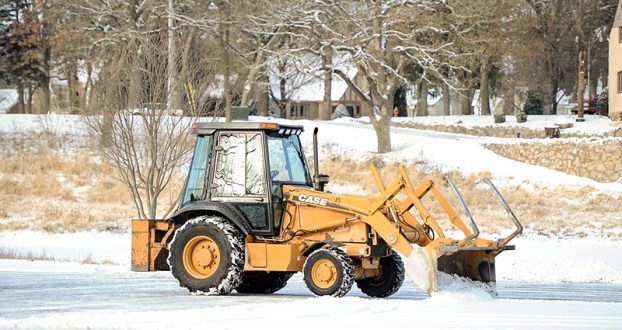 A front-end loader is used move snow from the parking lot at the foot of Skinner’s Hill Thursday. Both city and private snow removal have seen little in the way of work this year with very little snow having fallen to this point. Photo by Eric Johnson/photodesk@austindailyherald.com

No snow is good snow? Snow removal not a cheap proposition for the city

While having a white Christmas is the stuff of songs and Christmas cards, the reality is: snow is expensive

That is, when you have to remove it.

In wages, equipment and supplies, the city of Austin will typically spend between $15,000 (1-3 inches) and $25,000 (6 inches) per event, depending on the snowfall. There are about seven to 10 such events each year, said City Administrator Craig Clark, but there are probably a dozen or so more that are lesser events that might require just a sanding of some streets.

None of it is cheap.

“This is the high wear part on a plow truck,” he said.

Wages associated with each snowfall averages about $8,150, he said.

“This depends on when the snow falls, and if we have overtime; or, whether we bring in additional help,” depending on the amount of snow to be moved, he said.

There has not been much in the way of significant snow this season —yet — but that doesn’t mean drivers are not busy, he added.

“When they are not plowing, they’re typically working on cleaning waterways and retention areas of brush,” he said. “This helps in a high-water event and keeps things flowing properly,” he said.

Lack of snowfall “allows us to save material costs, and wear and tear, but even a larger amount of just small events can add up, too,” he said. “Every snow fall is different.”

Hormel aims to continue evolving in the new year

Snee Heading into the January annual meeting of its stockholders, Hormel Foods Corp. is coming off the second most profitable... read more