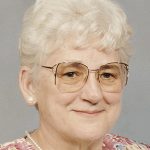 Mary was born Feb. 6, 1925, in Rochester, Minnesota, to Ross Emerson and Josephine Marie (Maxson) Hilliard. She attended school in Kasson, Minnesota, graduating in 1944. On June 28, 1944, Mary was united in marriage to Carlos Marvin Peterson in Kasson. Together the couple had seven children. Mary worked as a nanny to Walter Stussy and other children in the Kasson area. She enjoyed her role as wife, mother, and homemaker. Mary was a member of the St. Michael’s Lutheran Church in rural Waltham, Minnesota, and a former member of St. Olaf Lutheran and Grace Lutheran Churches in Austin. She loved to put together puzzles, enjoyed playing cards, bingo, and taking trips to the casino. She will be dearly missed by all who knew and loved her.

Photo: Prescription for a good Christmas