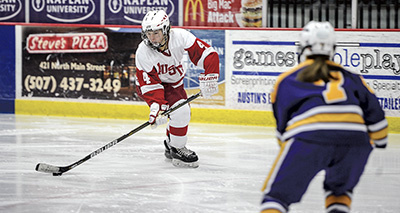 Austin’s Erin Bickler looks to shove a pass across the ice during the first period Friday afternoon at Riverside Arena. Eric Johnson/photodesk@austindailyherald.com

The Austin girls hockey team closed out its Holiday Tournament with a 9-1 loss to Rochester Lourdes (10-8 overall) in Riverside Arena Thursday.

The Packers (5-8 overall) have now lost seven of their last eight games. Austin has 11 games remaining in the season, with six of those contests being in Riverside Arena.

Lourdes tied with Rochester John Marshall as co-champions of the tournament. 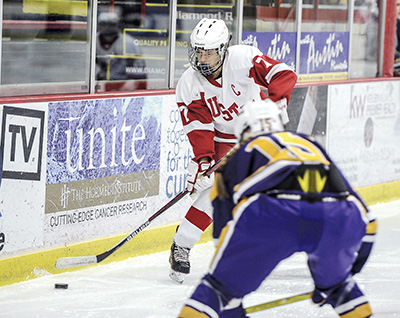 Austin’s Kylee Hanlon plays the puck against the boards during the first period against Rochester Lourdes Friday at Riverside Arena. Eric Johnson/photodesk@austindailyherald.com