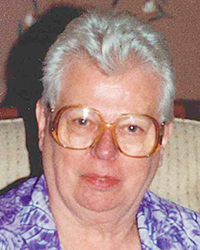 Joan was born Nov. 1, 1932, in Nevada Township, Minnesota, to Frederick and Anna (Heimer) Landherr. She attended grade school at St. John’s Catholic School in Johnsburg, Minnesota, and then graduated from Adams High School. She went on to have a 45-year career with the Geo. A. Hormel Company.

Jo was an active person. She traveled to Europe and Central America in her younger years, bowled – including a 600 series – and golfed. She loved her family and kept up to date on everyone’s activities and events, even as she ventured out less and less often. She was a passionate and generous supporter of her family throughout her life. She will be greatly missed.

She was preceded in death by her parents; brothers, Gerald and Donald; sisters, Jane Felten and Ann Howden.

A memorial service will be held at 11 a.m. on Wednesday, Jan. 3, at the Clasen-Jordan Mortuary Chapel in Austin with Father James Steffes officiating. Interment will be at St. John’s Cemetery in Johnsburg at a later date. Visitation will be one hour before the service.

Memorials may be designated to the donor’s choice.