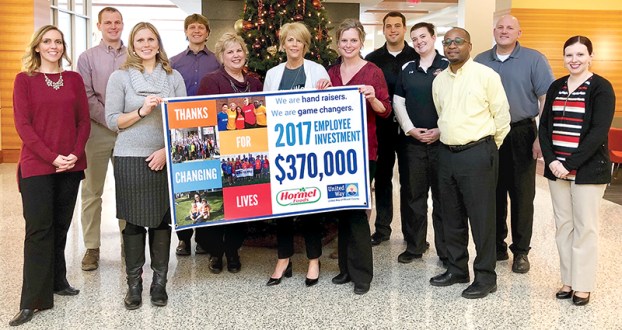 The United Way of Mower County has an additional $370,000 to put toward its programs thanks to donations from Hormel Foods employees.

A check for the raised amount, which was collected over a four-week campaign that kicked off in October, was presented to the UWMC on Tuesday morning at the Hormel Foods North Corporate Office.

“We’re extremely grateful for the partnership (with Hormel Foods),” said UWMC Executive Director Diane Baker. “Every year they set the bar higher and continue to be generous. It’s in their culture and they are committed to this community.”

“We do continue to raise the bar,” said Erica Tweeten, claims manager for Hormel Foods, who chairs the United Way campaign. “This year was a big year for us. People continue to be generous and the participation level has been up.”

The amount raised by Hormel Foods is approximately 30 percent of that goal.

“It all goes back to the employees,” Tweeten said. “They continue supporting the United Way year after year and are generous in giving back to the community.”

“(The need continues) to grow every year; we need to continue to raise more money to support those programs that really make a difference for all of us in Mower County,” Baker said. “Every year, (Hormel sets) the bar higher for the next year, so they obviously see the need in the community and continue to meet it.”

Tweeten said that money was raised by canvassers who reached out to Hormel Foods employees. She said they did events such as bake sales and selling parking spaces to help raise money.

“Our company has a focus on helping to support the communities in which we live and work,” she said. “Here in Austin, the Hormel Foods employees continue to amaze me with their generosity.”