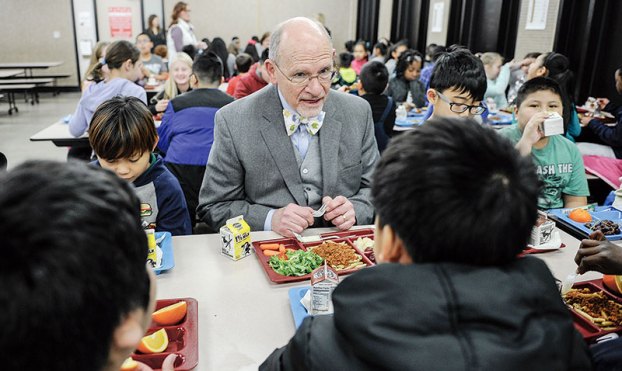 Minnesota Health Commissioner Dr. Ed Ehlinger was quick to quote the Greek physician Herophilus who, even as far back as 300 B.C., knew the connection between a healthy mind and body: “When health is absent, wisdom cannot reveal itself, art cannot manifest, strength cannot fight, wealth becomes useless, and intelligence cannot be applied.”

“Health is central to everything we do,” Ehlinger said, as he finished a hot lunch at Sumner Elementary School. He said Sumner staff and students had the right idea in working toward a healthy lifestyle.

Ehlinger visited the school on Tuesday just for the reasons he quoted. Sumner was the only school in Minnesota to earn a place on the Alliance for a Healthier Generation’s 2017 list of America’s Healthiest Schools, achieving a bronze award. Staff and students won the award due to their holistic approach to good health that takes into account the physical, emotional and nutritional aspects of well-being. The award was granted last spring by Healthier Generation’s Healthy Schools Program, an evidence-based national initiative to create healthier school environments where children can thrive.

Sumner Elementary continues this year to work hard on wellness, said principal Sheila Berger, noting the emphasis is on good nutrition and lots of movement. The staff has been very intentional about modeling good choices, from not drinking soda pop, to going to recess when the kids do — in the effort to show kids they enjoy physical activity, too.

“It also helps them strengthen the relationship” between the student and teacher, she added.

Indoor recess, Berger said, is not about watching a movie, but about other types of indoor activity. SHIP (Statewide Health Improvement Partnership) grants have helped the school purchase indoor recess kits that have games and other items that help students play hopscotch, for instance, or jump rope. 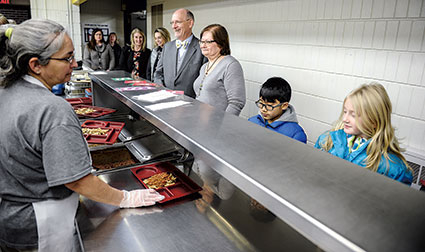 Dr. Ed Ehrlinger stands in line at Sumner Elementary and jokes with the cooking staff as he waits for his lunch during a visit Tuesday. Eric Johnson/photodesk@austindailyherald.com

“We want to get away from the things that cause kids to be sedentary,” Berger said.

Emotional health is part of the new approach as well. “Zones of regulation” are a good example. Those are strategies that allow students “to deal with overwhelming emotions,” Berger said. Children learn, as part of the curriculum, how to identify negative emotions, such as anger or sadness, and ways to manage them.

Social worker Maureen Noterman said the changes have resulted in a “cultural shift for our building.”

“It’s not necessarily easy,” she said. “You have to make a concerted effort to change that culture.”

For instance, candy is no longer given as a reward for good behavior or achievement; no birthday treats are allowed, unless they are healthy ones.

And if there are fundraisers, they are not structured around food sales, Noterman said.

The kids have embraced the program, she said, “and it’s helped staff, too” think about the healthy choices they make.

Dietician Jen Haugen , with Food and Nutrition Services for the district, said the program is one with many moving parts.

“You have to have a lot of people on board” to make the changes to better health, she said, from parents and students, to teachers and other staff. “It’s more difficult than what you would think.” 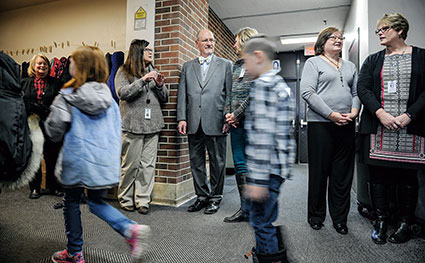 Ehlinger seemed to be having a great time as he sat down to eat lunch with youngsters, settling in with his plate of pasta, grapes, carrots and
salad.

“How many like fruit?” he asked as he ate, and smiled at the raised hands.

“How about vegetables?” he said, as a few more went up.

Opinions were solicited about the school breakfasts and lunches. He learned the kids liked pizza and burritos — a lot — but “the good stuff, too,” as one boy said.

“How about kale?” Ehlinger asked. “Does anyone like kale?”

Ehlinger laughed — as if to say, well, you can’t win ’em all.

As expected, the Austin School Board on Monday unanimously approved a 2.04 percent increase to its property tax levy, payable... read more