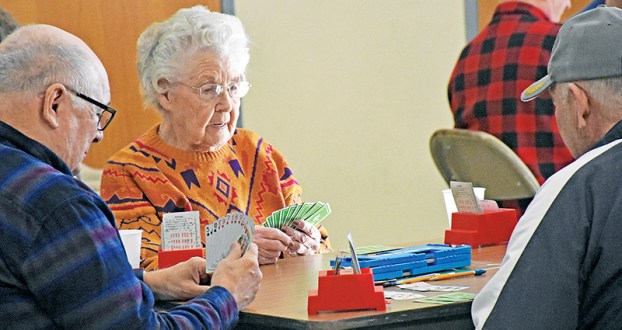 John Liesen, of Rose Creek, at left, and Austin residents Vandlyn Newman and Ron Peters play duplicate bridge Wednesday at the Mower County Senior Center. The bridge club, which meets Wednesdays at noon, had five tables playing. At times it has up to seven. Photos by Chris Baldus/chris.baldus@austindailyherald.com

This is an example of table talk during duplicate bridge play Wednesday at the Mower County Senior Center: Cards slap lightly on the folding table. You can hear Vandlyn Newman slide a six of diamonds into place using the eraser end of a pencil.

This is an example of a more talkative table:

Between play, waves of chatter, even laughs take over the room.

“By that time, I couldn’t get back to my hand.”

“I thought about raising a diamond.”

“Three clubs in the north went down.”

“We would have been better off to take the queen off the board.”

Sometimes, players even mention non-bridge topics. Then, it gets quiet again. 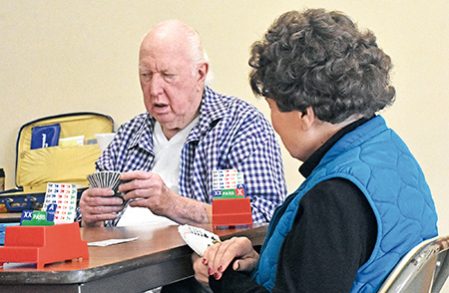 Chuck Borneman, from north of Hayward, and Cleo Osmund, of Adams, look over their cards Wednesday at the Mower County Senior Center in Austin during duplicate bridge.

It’s a serious game, played by not always serious people. It costs $3 to play, said a man collecting the money. “But we charge Joyce double.”

Two bridge clubs play each week at the senior center. Results are published on Saturdays in the Austin Daily Herald. All bridge players are encouraged to join the games at 12:30 p.m. on Tuesdays or noon on Wednesdays.

On Fridays, three players from the Wednesday club go to the home of a bridge player who can’t make it in because of medical issues, Newman said. Playing the game is proven to be good for you, helps keep you sharp as you age, she said, turning to the club’s director, David Ring, “Isn’t that right?”

He agreed, citing a bridge magazine.

The club that meets on Wednesdays at noon is the original club, dating back to the 1950s, Crowe said. “The Tuesday group has the original boards from the ‘50’s. They’re metal.”

A board is a central piece of equipment for bridge. It’s a rectangular contraption that holds one deal of 52 cards divided into four hands of 13 cards. Those deals are preserved and played several times by different players as they move from table to table.

This week, the club had five tables playing. There two pairs of partners at each table. Loren Cleland, who was the club director for 10 years, said there was a time when they would have 15 tables going. 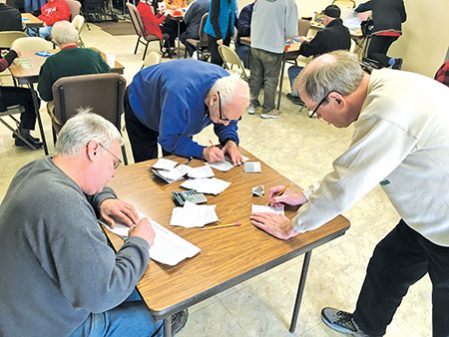 Players come from throughout the region, such as Rose Creek, Albert Lea, Adams and more.

Local players have gone on to play in tournaments.The American Contract Bridge League sanctions clubs throughout the nation and more than 1,200 tournaments a year, according to its website.

“If you want to play in a tournament, chances are good that you can find one just about any week of the year,” the website says.

A three-day Minnesota Winter Super Silver Sectional is coming up in late January in New Brighton.

Tournaments are nothing new to Austin players.

“I once played Omar Sharif,” Ring said about his tournament experiences. Sharif is an Egyption actor and bridge player and promoter who died in 2015 known for his roles in “Lawrence of Arabia” and “Doctor Zhivago.”

According the the ACBL website, he once said, “Acting is my business, bridge is my passion.”

Crowe said bridge is a sensational game and social event. Its challenge makes players leave problems and day-to-day demands behind, because you need to concentrate. It has helped her make it through difficult times, and she knows doctors and professionals who play for the escape, she said.

The Wednesday club wraps up play around 3:15 p.m. after 27 hands. Scores are tallied and results are announced about 3:45 p.m.

“You should come and play,” Newman said. “We’ll teach you. We’ll find you a partner.”

At 85 years old, Allen Anderson has a lifetime of stories. A graduate of Austin High School, class of 1951,... read more