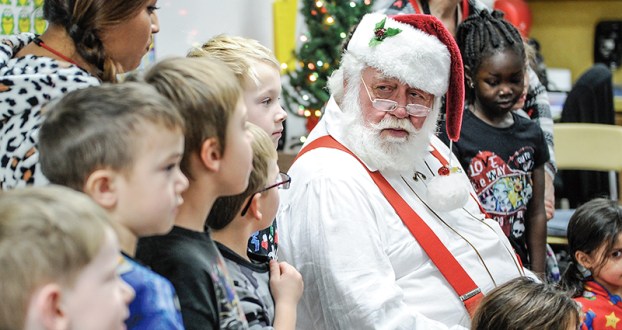 Santa looks down the line of kindergarten students after instructing them to give a merry “ho-ho-ho” for a picture Wednesday morning. Photos by Eric Johnson/photodesk@austindailyherald.com

Fresh off the rails; Woodson kids ride the Express and say hi to Santa

Woodson kindergarteners, as they have for the last several years, rode the Polar Express on Wednesday, ending their journey with a visit from Santa Claus.

With the help of “Conductor” Steve Turner, the kids, outfitted in their pajamas, gathered in hallways to ride the train before Santa arrived. The tradition was inspired by the popular children’s book “The Polar Express” by Chris Van Allsburg.

After they rode the train, the kids returned to their classrooms, waiting to have a photo of the class taken with Santa. 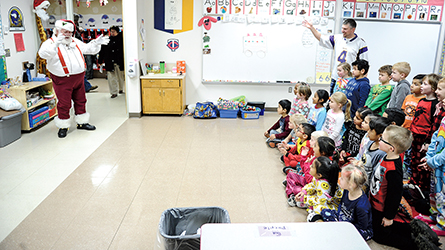 The red crickets got a visit from Santa Claus as he made his rounds through Woodson Kindergarten Center Wednesday morning.

The bells on his boots ringing his arrival, kids grinned and waved as St. Nick entered their classrooms.

Still, no self-respecting kindergartener lets Santa get away without some questioning. One asked if he could have a pony.

“Are you real?” asked another boy, dressed in Minions pajamas.

“What do you think?” Santa asked.

“Well, let’s just leave it at that, then,” said Santa, smiling. 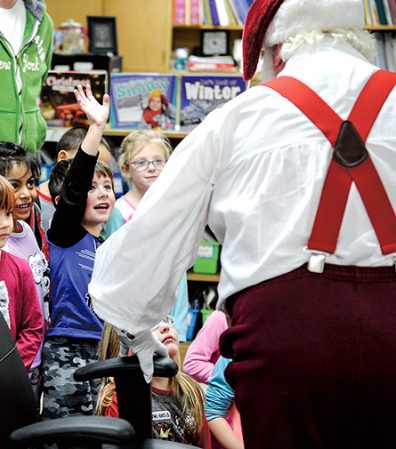 Principal Jessica Cabeen said the event was a “good way to capitalize on the energy” generated this time of year, and use that energy in constructive ways.

“And it’s fun,” she said, striding down the hall in her Spam pajamas.

Gabbard A man whose reported implied threats caused a soft lockdown at Southland and LeRoy-Ostrander Public Schools on Monday was... read more