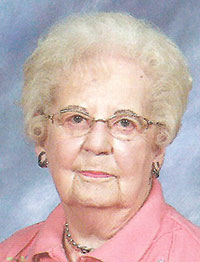 Dorothy was born July 19, 1920, in Austin to Oscar and Anna (Carlson) Johnson. Dorothy graduated from Austin High School in 1938. After graduation, she was hired by Austin Utilities in December 1938 and worked there off and on until she finally retired for good in 1972.

Dorothy married Oscar A. Anderson on Oct. 4, 1947, at St. Olaf Lutheran Church. Oscar passed away May 16, 1981, but Dorothy continued to live in their home in Austin until last August, when she moved to an apartment at St. Marks Senior Living.

A lifelong Lutheran, Dorothy was very active in her church. When St. Olaf Church became too large many decades ago, Dorothy and Oscar became charter members of the new Our Savior’s Lutheran Church on the west side of Austin. She belonged to the WELCA and Claudia circles. When she retired, Dorothy joined St. Mark’s Lutheran Auxiliary and served as president and treasurer for many years.

Dorothy was a great organizer, willing to be involved in a variety of activities. She worked in every one of her high school class reunions as secretary or treasurer. For over 50 years, she enjoyed meeting monthly with the women in her class for lunch, as well as monthly luncheons with the 5th Avenue SW Birthday Club.

She was preceded in death by her husband; parents; brother, Richard B. Johnson; and sister, Evelyn (Johnson) Pike.

Funeral services will be held at 11 a.m. on Monday, Dec. 18, at Our Savior’s Lutheran Church with the Reverend Karen Behling officiating. Visitation will be at Clasen-Jordan Mortuary on Sunday from 4-6 p.m. as well as at the church one hour before the service. She will be buried next to husband, Oscar, at Grandview Cemetery outside of Austin. Memorials may be designated to the Our Savior’s Lutheran Church Building Fund.