ST. PAUL — Minnesota Gov. Mark Dayton was set to appoint a replacement Wednesday for Sen. Al Franken amid pressure to choose someone who could keep the seat in Democratic hands in a special election next November. 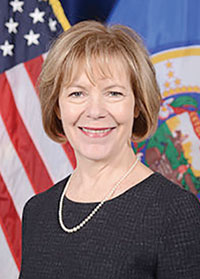 An announcement from Dayton’s office Tuesday said nothing about his choice, and Dayton has deflected questions about the appointment since Franken announced last week he would resign  following allegations of sexual misconduct.

Tina Smith, Dayton’s lieutenant governor and trusted former chief of staff, was widely considered his first choice. A Democratic official told The Associated Press last week that Dayton was ready to choose Smith as a placeholder before coming under pressure from national Democrats to appoint someone who could leverage the appointment into a 2018 run.

That official and a second Democratic operative said that Smith was considering a 2018 run amid that pressure. Both Democrats spoke on condition of anonymity to speak freely about private discussions ahead of an announcement. Smith, who earlier this year passed up an expected campaign for governor, did not immediately respond to telephone messages Tuesday. She has not responded to questions about the appointment since Franken announced plans to resign in coming weeks.

Smith founded a marketing and political consulting firm in 1992. She managed the unsuccessful 1998 gubernatorial campaign of Ted Mondale, and did the same for Walter Mondale’s abbreviated Senate campaign in 2002 after Sen. Paul Wellstone’s sudden death.

She served as a vice president of external affairs for Planned Parenthood Minnesota, North Dakota and South Dakota, from 2003 to 2006. Then, she served as chief of staff to Minneapolis Mayor R.T. Rybak before taking the same job with Dayton.