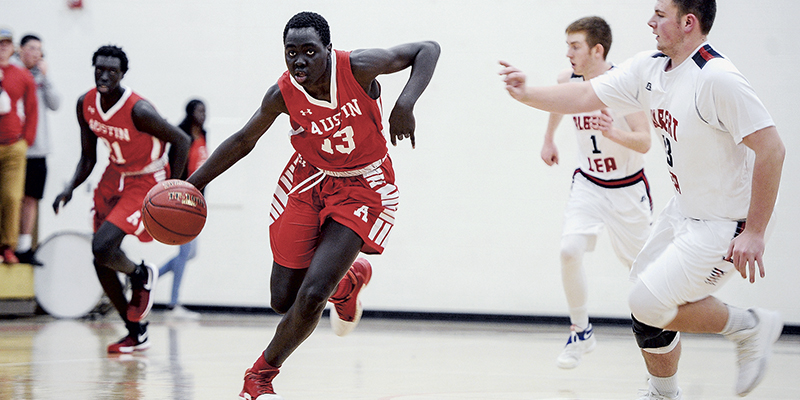 Austin’s Agwa Obang breaks down the court after a turnover in the first half against Albert Lea Friday night in Packer Gym. Eric Johnson/photodesk@austindailyherald.com

The Austin boys basketball team opened its season with an exclamation point as it ran past Albert Lea 93-34 in front of a packed house in Packer Gym Friday night.

The Tigers (0-1 overall, 0-1 Big Nine) hit a three-pointer to start the game, but Austin scored the next 18 points and it pushed its lead to 54-15 by the halftime break. 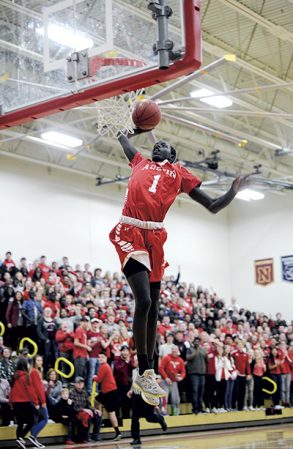 Austin’s Duoth Gach reaches up to slam the first of many dunks home during the first half against Albert Lea Friday night in Packer Gym. Eric Johnson/photodesk@austindailyherald.com

Duoth Gach, who had 18 points, had several breakaway jams, including a high flying two-hander on a lob from Moses Issa, who filled up the box score with eight points, four rebounds, nine steals, six assists and two blocks.

The Packers (1-0 overall, 1-0 Big Nine) forced 45 turnovers in the win and the defense of Issa played a big role in that number.

“We knew it was going to be a packed house and we were waiting on it,” Issa said. “It’s fun. We have a lot of chemistry in our transition game.” 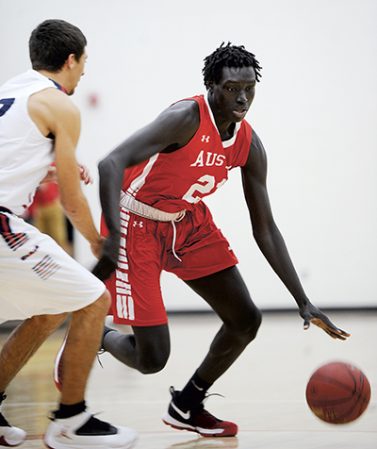 Austin played 11 players in the first half and 13 players broke into the scoring column.

“The energy was really good. This is the kind of game you want to open up with to get your feet wet a little bit. It’s nice to play in front of a crowded gym and it’s nice to play at a high level,” Austin head coach Kris Fadness said. “I’m happy with the attitude of our kids. We’ve got a lot of good players and it’s going to be hard to find time for all of them this year.”

With many players playing their first major varsity minutes, the Packers didn’t miss a beat. Medi Obang poured in 14 points off the bench, LaHenry Gills chipped in eight points and Nyagoa Obany had eight points.

Obang said the next generation of Packers are pumped to have a chance to play on a team that was in the Minnesota Class AAA state championship game lsat year. 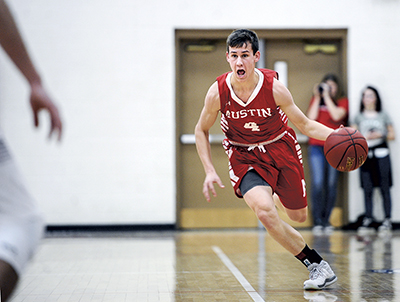 “I was kind of nervous coming out there, but then I thought to myself ‘I can do this.’ We’re very excited,” Obang said. 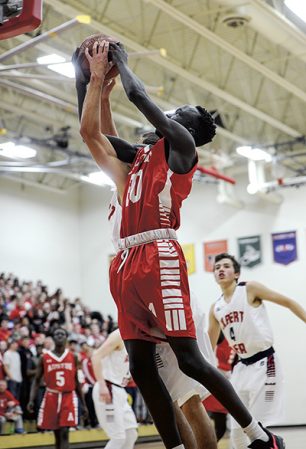 Austin’s Dongrin Deng battles for a rebound in the first half against Albert Lea Friday night in Packer Gym. Eric Johnson/photodesk@austindailyherald.com 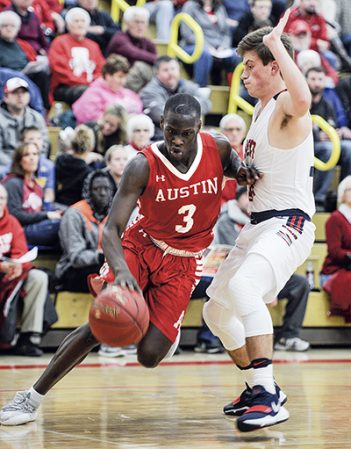 Austin’s Moses Issa pushes the baseline during the first half against Albert Lea Friday night in Packer Gym. Eric Johnson/photodesk@austindailyherald.com