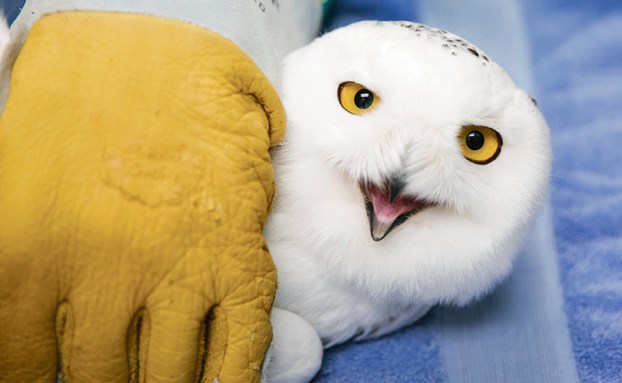 A snowy owl wakes up from anesthesia after a check up and physical therapy inside of the University of Minnesota Gabbert Raptor Center in St. Paul, Minn. on Tuesday, Dec. 12, 2017. Evan Frost | MPR News

A couple weeks ago, Ezra Bennett, master roaster at Alakef Coffee Roasters in Duluth, was closing up shop for the night, when he heard a strange sound coming from inside a roasting machine.

He popped open the small door, where there was just enough light to spot white feathers, and two big, yellow eyes.

A snowy owl had slid down a 30-foot chimney, and was trapped inside a steel vat that collects the dusty coffee residue left over from the roaster.

“She made a lunge for the door,” recalled Bennett, so he quickly closed the door, not wanting the owl to escape into the warehouse. Then he called Wildwoods, a wildlife rehabilitation center in Duluth.

“Is this a prank call?” animal care coordinator Tara Smith remembers thinking. “Why is a coffee roaster telling me there’s an owl in their machinery?”

This was no joke. This time of year is typically their slow season, Smith said, but this winter the center has already treated eight snowy owls.

“And for some reason, they are getting themselves into some pretty crazy predicaments,” she said.

Like getting trapped in a coffee roasting machine. Another was rescued from a biomass power plant in Grand Rapids. This week one died after getting rescued from the grill of a car on Interstate 494 in Bloomington.

And it’s not just Minnesota. There are reports of snowy owls around the Great Lakes and east to New England.

So what’s causing all these owls to fly more than a thousand miles south from the Arctic? Contrary to popular belief, it’s not because they’re starving, said Duluth birder and author Laura Erickson.

Starving owls, she said, wouldn’t be able to navigate such an arduous journey.

It does, however, have a lot to do with food availability. Snowy owls, when they’re breeding, feast on lemmings, small gerbil-like rodents. The lemming population is cyclical. It booms, and then crashes.

When those owls grow up, they have to leave to find their own hunting territories. And to the delight of birders in Minnesota, many fly here.

“What’s really cool about these owls (is) they’ve never seen people before. So they’re not scared of you,” said Rich Hoeg, a Duluth birder who’s rescued two snowy owls this year, one from a trail along the North Shore, the second from thin ice on Lake Superior.

“To see them swoop in and grab a vole or a mouse, and then swallow it whole … some people might think it’s gross. I think it’s cool,” he said.

But there is a down side to irruptions, said Erickson, because they can attract big crowds of people. And getting too close can stress them.

“And so it’s important for people not to get too close. It’s very enticing, but we have some ethical responsibilities,” she said.

Experts say enjoy them, but observe at a distance.

Most snowy owls acclimate just fine to their new surroundings, but some struggle during their first year. Some may have trouble hunting. Others may get hit by a car while hunting.

Many of those are turned in to the Raptor Center at the University of Minnesota, which has already treated 33 snowy owls this year.

“And that is significantly above normal,” said executive director and veterinarian Julia Ponder. “It is even higher than … other irruption years.”

But by the time the owls make it to the Raptor Center, it’s often too late to save them.

Some were dead when they arrived. About half died from starvation after they arrived, the others from injuries. Two are still being treated. Only one so far has survived and been released — the owl trapped in the Duluth coffee roaster.

“And I have to tell you it smelled like coffee when it arrived. It smelled fabulous,” Ponder said.

“He flew beautifully, he left and went straight back to the wild. Perched in a tree.”

To see the release of an owl rescued from a coffee roasting machine, go to: https://youtu.be/fFB_7kfLRFo

MONTICELLO — The Minnesota Department of Transportation is testing a driverless bus to see how it operates in cold weather.... read more