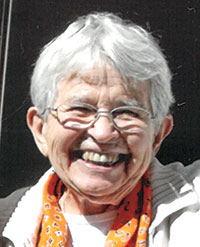 Betty was born March 11, 1927, in Mankato, Minnesota, to Russell H. and Helene M. (Hoberg) Hollnagel. Following her graduation from Mankato High School in 1944, she attended Mankato State Teachers College, where she studied physical education and English and graduated in 1948. On June 6, 1949, Betty was united in marriage to Irving Joseph Smith in Mankato. She taught secondary school in Cleveland, Minnesota, before moving to Austin in the early 1950s. In Austin, she continued teaching English and raised a family with Irving, who passed away in 1971. In 1972, Betty married John Benner, who died in 1982. Betty continued to work, holding a variety of positions in health and human services and writing and editing for both First United Methodist Church and Fellowship United Methodist Church in Austin. Toward the end of her working life, Betty found great joy teaching developmental reading and mentoring international students at the writing center at Riverland Community College. Betty enjoyed writing short stories, poems, and spending time with her story-telling group.  She especially loved spending time with family and friends. Her infectious smile, kind, generous spirit, and her talent for recognizing the poetic in everyday life will be greatly missed by her family and friends.

“…the stearman slips away into an endless hall of purple air.”

Memorial services will be held at 11 a.m. on Thursday, Dec. 28, 2017, at First United Methodist Church in Austin with Rev. Dennis Tamke officiating. Visitation will be held for one hour prior to the service at the church on Thursday. Interment will be in Oakwood Cemetery in Austin. Family prefers memorials to be directed to the American Macular Degeneration Foundation, PO Box 515 Northampton, MA 01061-0515, online at macular.org or the Riverland Community College Foundation, 1900 8th Ave. NW, Austin, MN 55912. Services prearranged and performed by Worlein Funeral Home of Austin. Condolences may be expressed to the family online at www.worlein.com.