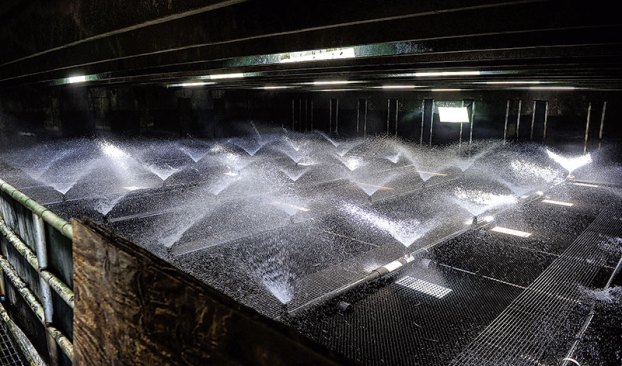 Sprinklers spray earlier this year as part of a process that removes ammonia from wastewater at the Austin Waste Water Treatement Plant. The city must upgrade the plan to meet new state standards. Herald file photo

The plan, which covers expenditures for items such as street construction, treatment plants, and public safety, was discussed during a public hearing at the Monday meeting.

The plan can be updated annually if necessary.

Funding for the plan will come from a combination of property taxes, investment earnings, user charges, and funding from outside donations and state and federal governments. For the most part, debt issuance will be used to pay for street projects, the cost of which at least 20 percent may be assessed to the property owners. The city intends to use bonding to pay for improvements to the Wastewater Treatment Plant. Part of the bonding is paid by Hormel Foods; however, a bond issue will not be needed should Hormel Foods pay cash for specific improvements.

The plan includes the following items:

The Austin Police Department will be looking to add one to three new marked cars per year, replace older unmarked cars, and replace or purchase new equipment, such as Tasers, computers, and a Throwbot Robot to be used in certain dangerous situations.

The Austin Fire Department wants to replace a fire engine and a fire brush truck as well as remodel the fire station to include upgrades, such as in the fire alarm system.

These funds will be used for general repairs around the library as well as replacing carpet/tiling, redesigning the children’s area, and renovating the restrooms.

The Nature Center is planning to use this to replace the carpet and tiling in the Ruby Rupner Auditorium.

Costs include replacing office equipment at City Hall, upgrading election equipment, and funding a compensation study among other expenses.

By far the plan’s greatest projected expense, upgrades to the Waste Water Treatment Plant will have to be made in order to meet the standards set by the Minnesota Pollution Control Agency.

Funds will allow for the construction of a cold storage building for seasonal equipment, replacement of the hydraulic vehicle hoist, and an addition to one of the central garage bays for extra storage among other things.

The Waste Transfer Station needs upgrades for the office, bathroom, pavement and loading dock as well as maintenance work done on the compactor.

The airport is in need of fuel tank upgrades, hangar maintenance, obstruction removal, and rehabilitation of the taxiway and runway among other expenses.

Expenses here include replacing or upgrading traffic signals, upgrading streetlights to LED, and improvements to pedestrian access on Oakland Place Southeast and Fourth Avenue Northeast in anticipation of the new Recreational Center.

Funds are needed for numerous projects, such as alley repairs, pedestrian ramp and sidewalk repairs, hazardous building removal, dam maintenance and replacement of the Fourth Street Northwest and Interstate 90 Bridge.

Parks and recreation projects include maintaining the Veterans Pavilion, painting the pool bottom, replacing the pool slide, refurbishing the Bandshell and updating playground equipment among other things.

Funds would be used for projects like upgrading storm sewers, installing rip rap to mitigate shoreline deterioration, creating a regional storm water pond in the area of Sixth Avenue and 29th Street, and developing a storm water and ponding plan for the Cook Farm site.

The money will be used to replace the water heater at the Senior Center.

The second most expensive proposal, flood mitigation work plans include levee improvements, construction of the Wildwood Park Levee, structural protection of various areas and the acquisition of property subject to repetitive flood loss among other projects.

Funds will go toward developing a schematic design for a multi-family building for the Riverview Housing Project, which was one of the City Council’s 2017 goals, in order to entice developers to build homes and alleviate the housing problem in Austin.

Economic development projects include redeveloping the dilapidated area of the north side of Eighth Avenue Northeast, cleaning up pollution on Port Authority property near Interstate 90 and 11th Drive and acquiring land for Industrial Park purposes.

A family of guinea pigs owe their lives to Austin Mayor Tom Stiehm after he found them while walking his... read more