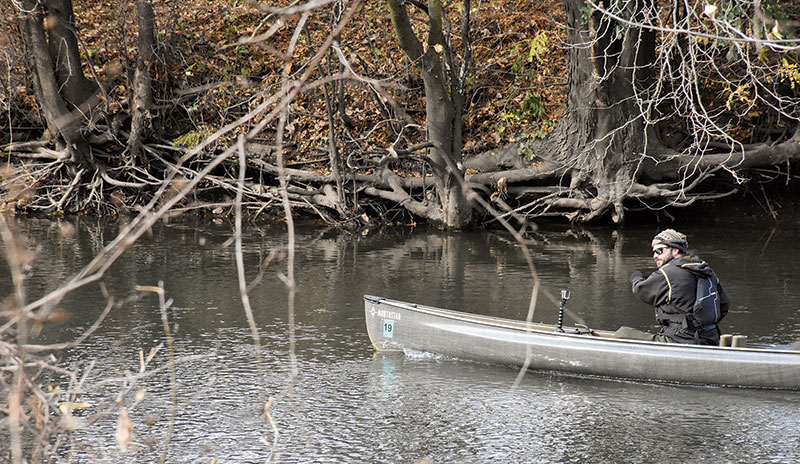 “Waterway Jay,” aka Jay Gustafson, paddles his way down the Cedar River on Tuesday, just above Lafayette Park on South Main Street. Gustafson, canoed through Austin on his way to finish his 16th state water trail, which ended at the state line. Next year, he will finish the second half of the 34-water trail effort, taken to raise awareness about water quality. Photos by Deb Nicklay/deb.nicklay@austindailyherald.com

Since July 6, Jay Gustafson — known in environmental circles as “Waterway Jay” — has canoed 16 of the 34 state water trails.

His “Paddle for Progress” effort for this year ended on Tuesday, paddling the Cedar River from the north, through Austin, and to the Minnesota-Iowa state line, just southeast of Lyle. He estimated that he could canoe between three and five miles an hour. He will complete his challenge in 2018.

The idea to paddle the state’s water trails sprang from another trip, taken in 2016. The Twin Cities business analyst-turned-water quality promoter canoed the length of the Mississippi River to the Gulf of Mexico. 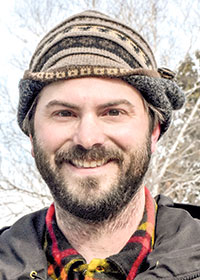 “I woke up every morning and I’d look out on the water — and everything made sense to me,” said Gustafson, 34. “My passion was on the water” and he found a need to raise awareness about improving the state’s water quality. Over 40 percent of the state’s waters are either impaired or polluted — and another 600 bodies were recently added, he said.

“I asked myself what I could do to make a difference,” he said. “I thought this plan was unique enough to raise awareness.”

He has learned a lot along the way, and gained a new appreciation for some of the state’s rivers he thought might not be all that great.

“I thought of the Minnesota River as a dirty river; but it was just beautiful, especially between Granite Falls and New Ulm,” he said. “The land, the rock outcroppings” were eye-opening, he said. The Cedar “was great, too,” he said. However, he did believe, like many of the trails, that clean-up efforts would do a lot.

He’s had a lot of time to think during his travels, he said. Gustafson knows there isn’t just one solution to improve water quality, “and it’s going to take a lot of people working together” to achieve real and sustaining success. The recent buffer strip law, for instance, “is just one piece,” he said. He added that the use of cover crops would be a major step in preventing run-off of farm chemicals into the groundwater, lakes, rivers and streams — “but it’s also expensive and we cannot expect farmers to shoulder all the cost of water quality.”

“Everyone has a vested interest in fixing this,” he added. 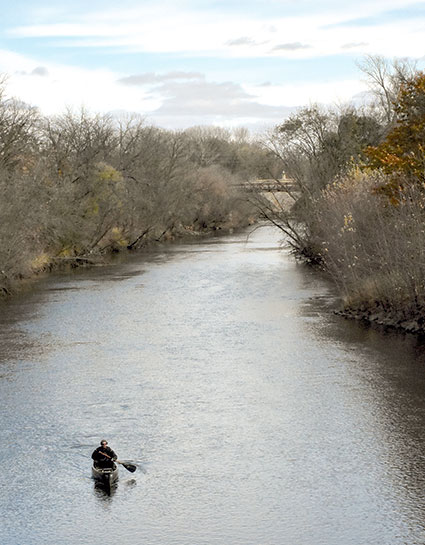 “Waterway Jay,” aka Jay Gustafson, paddles his way down the Cedar River on Tuesday, just above Lafayette Park on South Main Street. Gustafson, canoed through Austin on his way to finish his 16th state water trail, which ended at the state line. Next year, he will finish the second half of the 34-water trail effort, taken to raise awareness about water quality. Photos by Deb Nicklay/deb.nicklay@austindailyherald.com

Gov. Mark Dayton held water quality town meetings in different locations of the state, and that was a valuable step, Gustafson  said, in educating citizens about the need for clean water. Still, it will take the Department of Natural Resources, Pollution Control Agency, soil and water conservation districts, and other agencies, to “come up with a way to support water quality,” he said. “It takes everybody doing their part.”

The Sioux Falls, South Dakota, native will spend the winter planning the second half of his 2018 journey on the 18 remaining water trails. And after that? He’s not sure, but he knows one thing: He will be a part of the state’s clean water initiative, whatever form it eventually takes. He has kept a video journal of his travels, so he has plenty of data, he said.

But for now, he will spend the next few months getting ready for the call of the rivers.

“I sing a lot when I am on the river, look at the scenery,” he said with a grin. “But then, there are long stretches where I just don’t think of anything, I guess. I just enjoy it.”

For more information on Jay Gustafson, go to his website, Waterway Jay, to read about his trip and his purpose. Go to: https://waterwayjay.com/