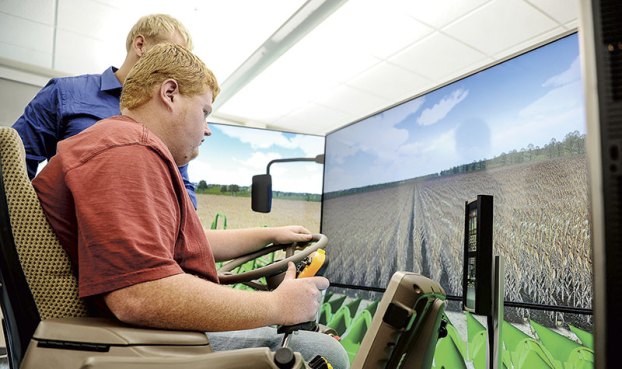 Student Tanner Boelter takes a spin Tuesday on the combine simulator at Riverland Community College after it was officially unveiled to the public. Photos by Eric Johnson/photodesk@austindailyherald.com

And that, in a nutshell, is the whole point of the new acquisition by the Center for Agricultural and Food Science Technology at the college — to make farming real. 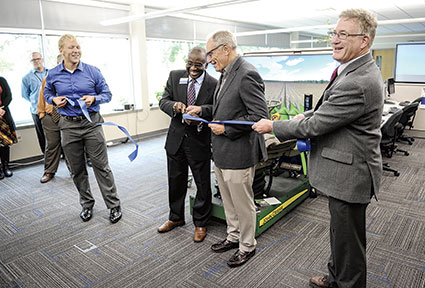 The new simulator provides a near-real life experience to the school’s agriculture students, some of whom have not had experience with farm machinery. It offers the best possible scenario for learning without having to climb into a real — and expensive — piece of farm equipment.

Officials gathered Tuesday to officially launch the simulator, and to formally thank the Hormel Foundation for its $25,000 donation to the purchase.

The simulator provides a driver’s seat — with all the correct steering and other cab essentials — and monitors that make it look as if you are in the seat of a combine, ready to harvest a field of soybeans or corn. It instructs on movement and safety, as well crop health, such as moisture content, yield, fuel consumption, just to name a few. 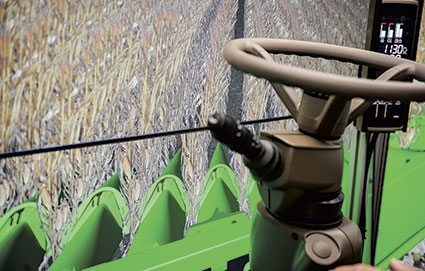 “It is a glorious day in the world of agriculture and food science technology,” said RCC President Adenuga Atewologun. “This symbolizes our commitment to educate the next generation of producers, farmers and entrepreneurs,” he said.

Gary Ray, head of the Hormel Foundation, said the simulator is one example of the foundation’s desire to elevate Riverland Community College and its programming. He noted Silicone Valley’s impact on the world’s technological future; there was no reason RCC “couldn’t lead the effort for our agricultural future.”

Ag instructor Willie Mekeel called the simulator “a cutting-edge way to teach ag safety and standard operating procedures.” He said he doubted many institutions had such a valuable addition to their agriculture programs.

He said it also adds to the technological tools that provide RCC students with better preparation in the field of ag. The department has been using drones to scan fields, which can pinpoint field conditions such as soil moisture levels, pest stress, and stand count. 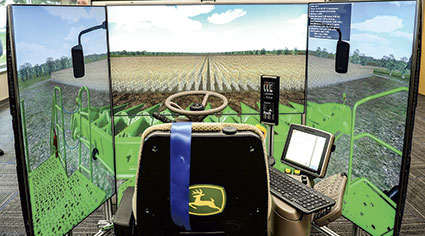