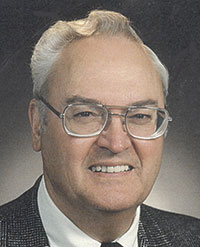 He was born Dec. 13, 1930, to Leo and Lela (Hume) Colling on a farm near Indianola, Nebraska, and grew up with one brother and four sisters. Following his 1948 graduation from McCook High School in Nebraska, Leslie began his career with Hormel Foods Corp. in September 1949 as a general laborer on the hog slaughtering floor in Fremont, Nebraska. It was in Fremont that he met his future wife. On March 18, 1951, Leslie was united in marriage to June Louise Larson at the Methodist Church in Oakland, Nebraska. Their union was blessed with two children and 59 years of marriage. Mr. Colling served his country in the U.S. Army during the Korean War, achieving the rank of sergeant. He was honorably discharged in 1954. Leslie continued his education at Midland University in Fremont, where he graduated cum laude in 1959. His 41-year career with Hormel continued until his retirement on Dec. 30, 1990, after serving as curemaster and director in charge of all cured and smoked meats for the entire Hormel company. Leslie served as the company’s curemaster from 1977-1990, during which time his familiar signature appeared on every Cure 81 ham produced.

A member of Westminster Presbyterian Church in Austin, Les was also a past member of both the Elks Club and the Austin Country Club. In his early years, he spent his spare time fishing and hunting. Later in life he enjoyed travel and golf. His family and friends will miss him dearly.

Les is survived by his children, Ron Colling of Austin and Carolyn (Brian) Avery of Naperville, Illinois; one grandson, Daniel (Ashley) Cast; and great-grandson, Benjamin Cast of Cincinnati, Ohio. He was preceded in death by his parents; his wife, June in October 2010; four sisters, Harriet, Helen, Marge and Mary Ann; and his brother, Lowell.

Funeral services will be held at 11 a.m. on Saturday, Sept. 30, 2017, at Westminster Presbyterian Church in Austin with Pastor Michael Olmsted officiating. Visitation will be from 4-7 p.m. on Friday, Sept. 29 at Worlein Funeral Home in Austin, and one hour prior to the service at the church on Saturday. Interment will be in Oakwood Cemetery.

Memorials can be directed to Westminster Presbyterian Church, the Mower County Humane Society, or recipient of donor’s choice. Services prearranged and performed by Worlein Funeral Home of Austin. Condolences may be expressed to the family online at www.worlein.com.

Inside a St. Paul lab’s battle against aquatic invaders