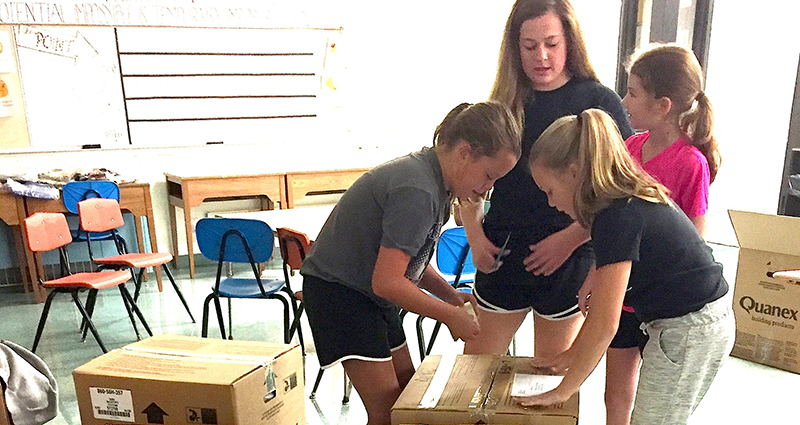 Some people shout their successes from rooftops — but in Hayfield, they mark good work by making people sleep on them.

Well, at least that will be the case next week at Hayfield Community Schools when Principal Grant Klennert and Assistant Principal John Howe climb to the roof of the school to snooze.

Oh, and their superintendent, Gregg Slaathaug, will be getting duct-taped to the gym wall during a homecoming pep fest next week. 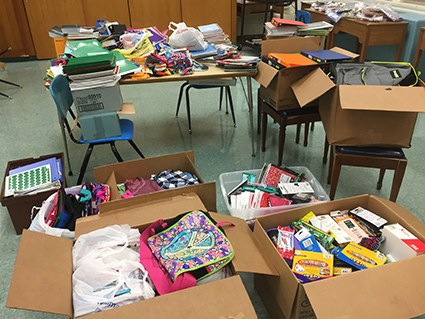 FACS teacher Jana Wagner said supplies shown here were about half of what was sent in the first of two shipments to the Texas school. Photo courtesy of Jana Wagner.

Well, administrators are keeping their end of a bargain because their students kept theirs. Students during
the first week of September were challenged to collect school supplies and clothing, and raise $800, for hurricane relief.

All will be sent to West High School in Victoria, Texas, that is housing
many students whose homes and schools were badly damaged from Hurricane Harvey in late August.

“Our kids were in it from Day One,” said Klennert. And, he added, when the community heard of the bargain, “I had two adults in the office, almost immediately, writing out $100 checks. They said, ‘We want to see you on the roof.’ “ Church groups supported the effort, too.

Students wasted no time and ended up with almost 30 boxes of school supplies and clothing, as well as $1,500 — almost twice the goal. 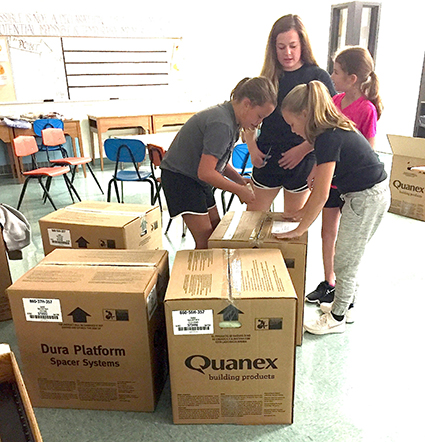 The fundraiser was triggered with an idea from the school’s Family and Consumer Science teacher, Jana Wagner, who saw a post on a national FACS site that talked of adopting a Texas classroom whose students needed supplies and clothing. As a result, the Hayfield students connected with Victoria, Texas, who more than welcomed the donation.

One highlight in a series of “wow” moments came when FedEx said it would ship the items to the Texas school free of charge.

“That allowed us to take $400-$500 that would have gone toward shipping and use it toward the fundraiser, Klennert said. “That was unbelievable.”

While kids in Texas will enjoy the results, Klennert said Hayfield students also learned a big lesson — that in times of need, Hayfield students, their parents and community step up to help.

“It’s been completely one of those moments, when you feel the spirit” of community, and working together for a cause, Klennert said. “It was an incredibly worthwhile effort.”

“I expected a lot,” agreed Wagner. “But the support was overwhelming.”

Klennert said he and Howe have already “scoped out” a few not-easily-seen spots on the roof. They aren’t going to tell the students when they’ll be headed up.

“Given that it is homecoming next week, we don’t want to add any more to the shenanigans,” Klennert said with a laugh. 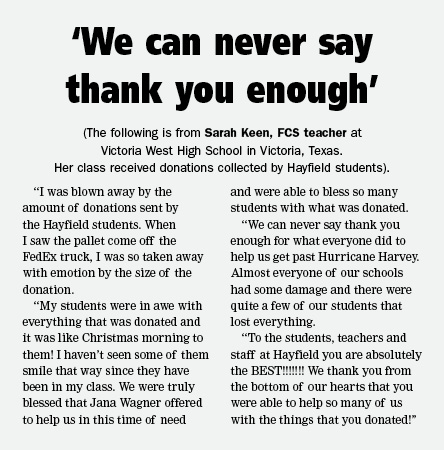