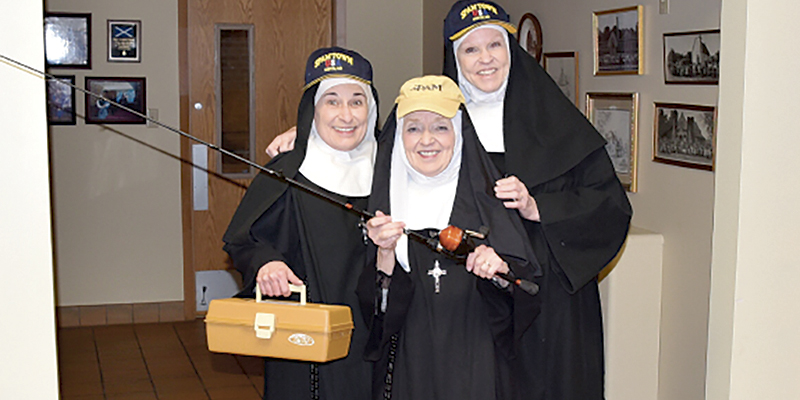 Penny Kinney, from left, Alice Holst and Coni Nelson are the St. Andrew’s Sisters and they will be performing at the Paramount Theatre on Sept. 23. Photo provided

Penny Kinney, Coni Nelson and Alice Holst have made it a habit of entertaining and performing over the years, but they also have been getting into the habit of something else — a nun.

For the last three years the trio has been performing an act as the St. Andrew’s Sisters and for the first time they will be bringing shtick to the big stage with their show “St. Andrew Sisters — Zero Shades of Gray,” at the Paramount Theatre at 7 p.m. on Sept. 23.

With a history of performing more intimate shows as the nuns Sister Mary Genesius (Kinney), Sister Mary Cecelia (Nelson) and Sister Mary Jude (Holst), this will mark the first time they have performed for a bigger audience.

“It’s going to be a little different,” Kinney said. “Most of the times it’s very intimate, where we can make eye contact with the audience.”

And what they bring is a unique brand of schtick with a religious theme with some moments of heart worked in for good measure.

“I think [the audience] will have a lot of fun,” Nelson said. “I think it’s more fun for people if it’s people they know.” 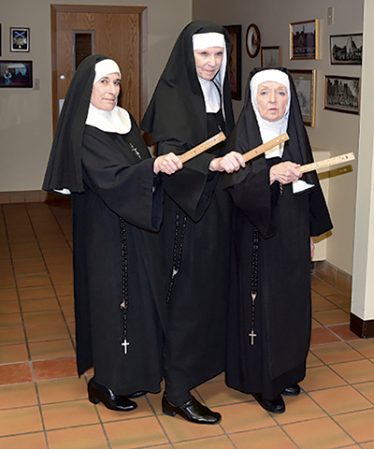 The St. Andrew’s Sisters will be brandishing their rulers on Sept. 23. Photo provided

Kinney conceived of the idea of the sisters after taking part in a women’s retreat.

In an effort to liven things up a bit, Kinney was approached by Lisa Dunlop.

“They always had people tell stories that were serious so Lisa [Dunlop] asked me to provide some lighter moments,” Kinney said.

The idea came to Kinney to resurrect characters she played with the help of Nelson in the Summerset Theatre productions of “Nunsense,” of which there were three versions performed over the years.

However, they chose not to do a strict copy of what they did and instead focused on creating new characters.

“We switched,” Kinney remembered. “We thought that if we are going to do anything on our own we couldn’t do that.”

Eventually, Holst joined the group and they began performing at different churches, and small-group functions.

They even opened for The Temptations when they played at the Spam 75th birthday celebration.

When the door really opened up for them, however, was a religious retreat.

“We performed at a WELCA regional conference and that’s when the doors opened up,” Kinney said. “Then the calls started coming.”

The trio focus their performances around a girl group formula, only as nuns with a religious angle. Nothing so unseemly or insulting, but instead something everybody could laugh at.

Even the title of their show later this month takes a tongue-in-cheek stab at the book, “Fifty Shades of Gray.” Within the nunnery, there are no gray areas. It’s all just black or white and the performers play on that.

And they have found success in the religious world and even when the performances are in front of a Lutheran audience it still can relate.

“If you’re Lutheran you can still identify with it,” Holst said.

And the goal remains the same at each show.

“What we are talking about and what it should do is to have a happy life perspective from three nuns,” Kinney said.

The women find the performances difficult at times with so many things to juggle, but what really makes it work is the act of working together,.

“I think one of the biggest things for me is we have a lot of respect for each other,” Holst said. “Because we know what to expect and what we can bring to the table.”

The show plays with humor, heart and song as the Kinney, Nelson and Holst take on the personas of the three sisters.

“When you put on that habit,  you feel different,” Nelson said.

However, each show remains scripted and is written for the situation. There is very little room for improve which is how the ladies like it even though from time to time the situation arises.

But for the most part they keep the train on the tracks, especially for a show of this magnitude.

However, the door is left open a crack with the addition of audience participation. There isn’t a lot of it, but the three do ask for volunteers on stage to make the performance more interactive.

“The nice thing is our characters take care of each other,” Nelson said. “If one of us forgets a line … we look out for each other.”

What people can expect is a show for everybody.

What people can also expect for the upcoming show are some special guests that will help move the show along.

This kind of show is also a perfect fit for the Paramount and the town of Austin. They pointed to a survey done by the Austin Area Commission for the Arts that asked residents what they wanted to see the most.

“We were very flattered,”  Nelson said. “The AACA asked us if we could do this show. The No. 1 thing people liked to go to was local entertainment.”

And they are hoping to give back from the efforts. After expenses for the show are taken out, a large majority of the proceeds will go towards the Paramount Theatre operation including efforts to renovated the historic theater.

However, if you need more reason to go, the nuns themselves have some reasons.

Sister Mary Genesius uses the afterlife as reason. “If you’re a Catholic, your purgatory time will be reduced.”

However, if you want some shenanigans, then you could hardly do worse. “My job is to maintain order and focus,” Sister Mary Cecelia said. “I don’t do a very good job.”

And Sister Mary Jude just wants everybody to be happy. “I’m going to be so happy people will be happy with me.”