For the record: Hayfield seniors stay focused on winning 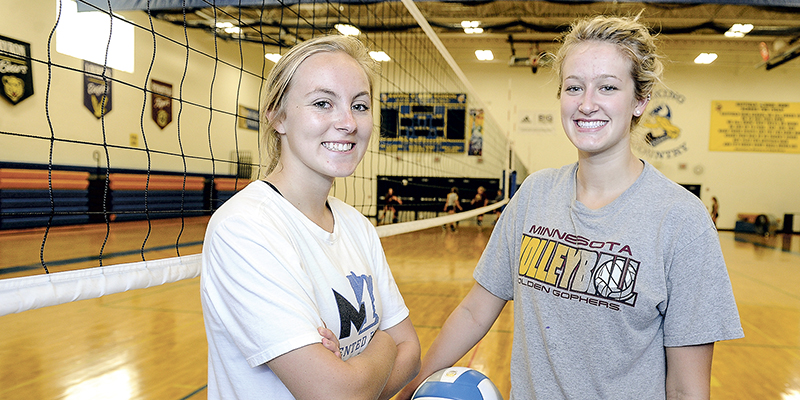 HAYFIELD —It was just another night of volleyball for Hayfield seniors Carrie Rutledge and Maggie Streightiff until both of them set school records in the No. 2 ranked Vikings’ eighth straight win to start the season.

“They’re fabulous people,” Hayfield head coach Jeremy Struck said. “They work for the team and they’re supportive of the team. They want the team to do well and that goes for basketball and softball too. They’re just good people to have on the court. They’ll do the dirty work and they’re not aware of individual stats. Neither one of them were aware of where they were when they [set the records.]” 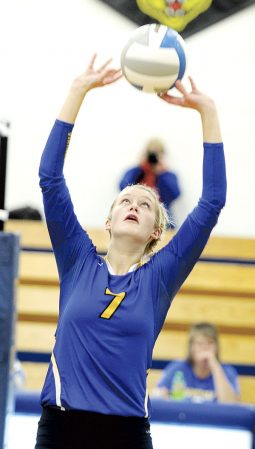 Streightiff now has 1,833 career set assists, which puts her on pace to reach the rare 2,000 mark for her career. She broke the record of her older sister Molly, who graduated from Hayfield in 2011. Maggie grew up watching Molly run the Vikings’ offense and now she’s been reflecting her big sister’s work for the past four years.

“I always looked up to her with how hard she worked to get to where she was and I always wanted to be like her. We grew up playing volleyball together,” Maggie said.

Rutledge, an outside hitter, set a new Hayfield digs record when she recorded her 1,115th career dig. That mark surpasses the record of Alyssa Selk, who graduated from Hayfield in 2011.

“Alyssa was a really good player and it was nice to look up to her and see how she did it. It was the same with [Hayfield grad] Bhrett Zhanle and I looked up to her too,” Rutledge said. “I love the back row. I think it’s really fun to dig and when you see that ball coming to your side, you’ve got to do everything you can to get it.”

Rutledge has also been big part of Streightiff’s set assist record as she’s been a big hitter for the Vikings. Since the two have played together in three sports for years, they are always in sync with their communication.

“She’s probably the best setter anyone could ask for,” Rutledge said. “Her sets are always spot on and I never have to adjust. It just flows.” 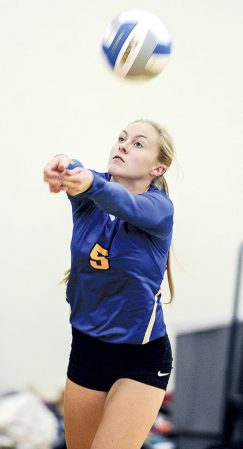 Hayfield’s Carrie Rutledge plays the ball from the back row against Dover-Eyota Saturday during the Hayfield Invite Saturday in Hayfield. Eric Johnson/photodesk@austindailyherald.com

While setting big records is something many high school athletes would dream of, Streightiff and Rutledge are more concerned about doing something that’s never been done in Hayfield’s school history. They, and the rest of the Vikings, are hoping to make a push to the Class A state tournament.

While the team never talks about their state ranking or looks too far ahead, Rutledge and Streightiff both said that last year’s four-game loss to Caledonia in the Section 1A title match stung deep.

“It made us mad. We knew could beat them,” Streightiff said. “We’ve been very competitive in practice and in games [this year], but we’ve had fun on and off the court too. That’s a big part of it.”

Struck said the Vikings, who have a huge senior class, have a different edge to them this season after they came so close to getting to state last season.

“They’re not going to back down from anybody and that’s a different attitude than we’ve had in the past when we were fearful,” Struck said. “It’s a flip flop where we are the team to be feared, we’re going to have a good year and we’re going to go after everyone.”

Streightiff and Rutledge still have a lot of competing to do with the Vikings this year, but both of them are starting to look towards their futures in sports. Rutledge isn’t sure what sport she wants to play in college, but Streightiff has verbally committed to play volleyball at Division II University of Upper Iowa under a partial athletic scholarship next season.

The Peacocks, who play in the Northern Sun Conference, are off to a 9-0 overall start this season. Streightiff likely would’ve had chances to play college basketball or softball, but she followed her heart and picked volleyball.

“I’m most passionate about volleyball, even though I like my other sports too,” Streightiff said. “I like the campus, the coach and the team at Upper Iowa and I like the competition in the conference.”

The Vikings will play at Kenyon-Wanamingo at 7:15 p.m. on Thursday.