Why is there no news on Page 1? More than 200 state papers make statement about importance of community journalism 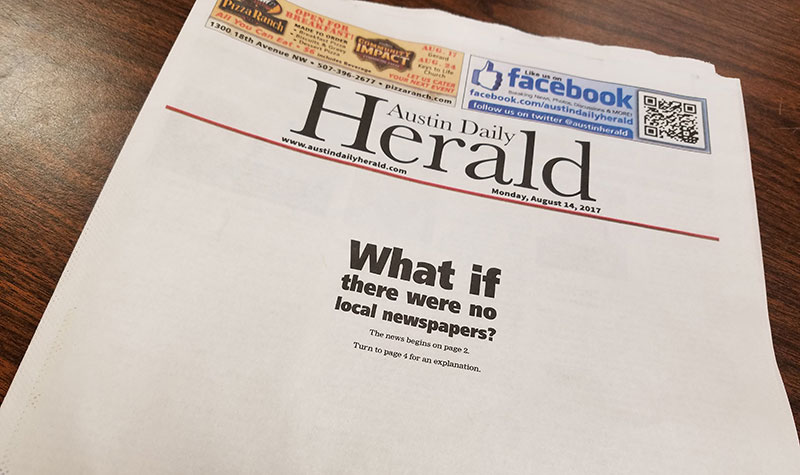 Today’s empty front page is not a statement made lightly.

In this age of expanding information avenues — many of which range from hyper-partisan to dangerously fake — more than 200 Minnesota newspapers are making a statement about the importance of credible, local journalism practice everyday in your communities.

Consider this: Your local newspaper is held responsible by you at the most personal level possible. We listen and respond and serve our readers and communities. We have a direct stake in your success and that of our communities. Without you, there is no Austin Daily Herald.

This week, more than 200 newspapers across the state of Minnesota will publish no news on their front pages for one edition. This “Whiteout” is taking place during Minnesota Newspaper Week, which ends Aug. 19. It’s part of the Minnesota Newspaper Association’s yearlong celebration of its 150th anniversary. The Whiteout reminds Minnesotans of the important role that newspapers play, writing the first draft of history and telling the stories of their communities.

“In many communities across the state of Minnesota, the newspaper is the main source of local news,” said MNA Executive Director Lisa Hills in a news release about the White Out. “Newspaper journalists across the state attend city council and school board meetings, they cover town festivals and local sports teams, and they arrive on the scene to document history during natural disasters and other community challenges. We know newspapers play an important role.”

While alternative sources present alternative visions and alternative facts, community newspapers take credibility seriously  — always have and always will, whether the platform we present on is electronic or paper. The very structure of news reporting with editors and reporters vetting stories and photos for accuracy and fairness. Newsrooms are the furthest things from echo chambers. They are filled with professionals ready and willing to challenge each other to get the stories right. And if we stumble, we admit it to the world and press forward, fearlessly pursuing the truth and doing the best we can for our communities.

Today, 25 daily and 295 non-daily newspapers, from Worthington to Warroad, Bird Island to Baudette, Elbow Lake to Ely and every community in between, belong to the Minnesota Newspaper Association.

“Minnesota Newspaper Week is a statewide initiative that reminds individuals of the importance of a free press,” reads Gov. Mark Dayton’s proclamation about the week. “Freedom of the Press promotes a well-informed constituency, improves public policy, increases responsiveness and accountability, and enhances public confidence in governmental institutions.”

Minnesotans agree that newspapers play a vital role in the state, according to the MNA news release. MNA’s member newspapers have a total circulation of more than 2.2 million each week. A 2014 Scarborough readership survey found that 89 percent of Minnesotans accessed a newspaper in print and/or digital format in the past month. Minnesotans of all ages read Minnesota newspapers in print and online. It’s no wonder that In a state where many read their local newspapers, the population is also civic-minded and involved in activities like voting in local elections. According to state officials, more than 81 percent of registered Minnesota voters cast ballots in the November 2016 election. That’s just under 75 percent of eligible Minnesotans.