Bonding in the back row: Hayfield’s Carney sisters have excelled at libero 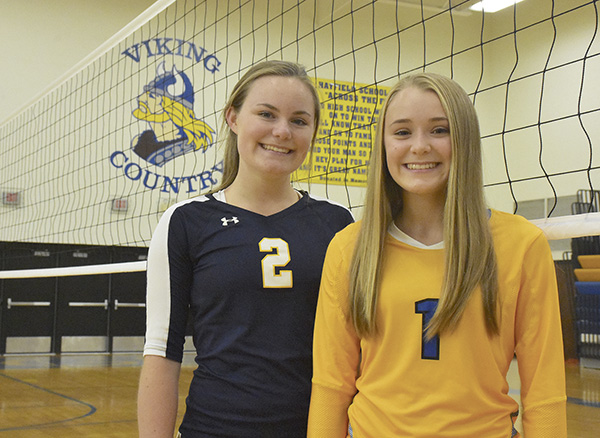 Sisters Anna Carney, left, and Cela Carney, are both playing libero this fall. Anna is playing at RCTC and Cela is playing for Hayfield. Rocky Hulne/sports@austindailyherald.com

HAYFIELD — It takes a special kind of personality to want to step on a hard gym floor and dive repeatedly after volleyballs flying at high speeds, all the while trying to keep a focus on your teammates so you can set up the offense.

That’s the life of a libero on the volleyball court and if a team doesn’t have a good one, they are likely going to struggle. Hayfield head coach Jeremy Struck said the position is crucial, not just from a defensive perspective, but an offensive as well.

“The libero position is one of the toughest positions to play,” Struck said. “Liberos use great speed to track down balls, are the catalyst of many offensive plays on serve receive, and must be able to dig a ball from the opponent’s best hitters. Our liberos do the dirty work for our team.”

Luckily for Hayfield, sophomore libero Cela Carney is quickly picking up where her older sister Anna left off. Cela, who played setter in the past two years, has taken over at libero for Hayfield this fall and Anna, who graduated from Hayfield last spring, is starting her college volleyball career at Rochester Community and Technical College. 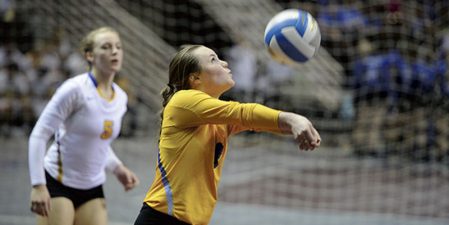 Hayfield grad Anna Carney makes a play on the ball for the Vikings in Mayo Civic Center last fall. Carney is now playing libero at RCTC and her younger sister Cela is playing libero for Hayfield this season. Herald File Photo

Cela, who had 19 digs in a sweep over Fillmore Central last week, was able to learn from watching her older sister last year and now she’s starting to realize just how difficult the position can be.

“She makes it look easy, but it’s really not easy. I’m learning how to do it and I think I like it,” Cela said. “From watching her I learned a lot, like where to go and what place to be on the court when people are hitting. It’s really nice to have someone to look up to.”

Anna, who has 40 digs in her first three matches for RCTC this season, has played libero since she started playing volleyball. When Cela mentioned a bruised hip that Anna had all of last season, Anna simply smiled and shrugged it off as a routine thing that comes from playing in the back row. Anna’s learned to live with the bruises and the pain that come with playing such a crucial position.

“It’s not really something you can teach,” Anna said. “You’re just born with it. I think it’s pretty cool [that Cela is playing in my spot]. She has a lot of years left and the group around her is really nice. We talk to each other about volleyball a lot and over the summer we played together outside a lot.”

While Cela and Anna have motivated each other in volleyball, they’ve also received plenty of motivation and inspiration from their first cousins Paige Tapp and Hannah Tapp, who were both standouts for the University of Minnesota volleyball team.

Paige and Hannah, who are Stewartville grads, are both current members of Team USA for volleyball and both of them were on hand to watch Hayfield’s historic upset of Faribault Bethlehem Academy at the Mayo Civic Center last year.

“It’s been fun watching them progress to USA. It’s been crazy,” Anna said of Paige and Hannah. “They’re usually busy, so it meant a lot when they came to watch us last year.”

Struck said that Anna was one of the best liberos in the HVL last season and he likes what Cela has done for Hayfield so far this fall. Cela is playing with added pressure for a first-year starter as she is surrounded by a big senior class that was on the verge of Hayfield’s first ever state tournament appearance last year.

The Vikings played in its first Section 1A title match in school history in 2016, but they were knocked off by Caledonia in four games. Hayfield, which is ranked No. 2 in Class A this season, is hoping to finally get over the hump this fall.

“The senior girls have put their full trust in Cela to get the job done,” Struck said. “She has improved very fast since the start of the year and they are watching this improvement happen before their very eyes. They played for a couple of years with Anna and recognize similar attributes in Cela.”

While Anna is now playing for the Yellowjackets, her heart is still with Cela and the Vikings. She’s pulling for Hayfield to make it to state this year and she’ll be watching the team and her sister closely. Cela said she’s willing to do what it takes in the back row to give her team the best chance of winning every night they take the court.

“You have to have a team first attitude and you have to be willing to sacrifice yourself to make a play and save a ball,” Cela said. “Everyone’s really serious in practice and we really want [to get to state this year].”

Hayfield will host Medford at 7:15 p.m. on Thursday.

Austin mother of 5 who died in house fire…