The Wide Angle: Way up the north 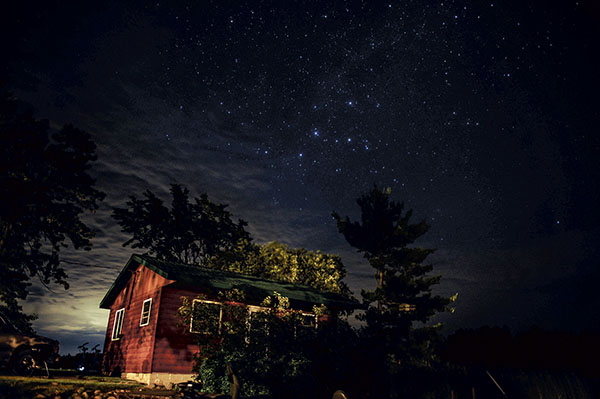 Doesn’t get much better than this. Cabin, on a lake, up north. Eric Johnson/photodesk@austindailyherald.com

By the time my six or eight readers get to skimming through my column — after of course you read the comics, obituaries and that ad on Page 6 — I will be somewhere near the Twin Cities, on our way to our yearly vacation near Park Rapids.

This is a special place for my family, having visited this part of the state for many, many years reaching all the way back to when my dad was a kid.

For me, it’s a place of memory, though since I became a semi-functioning adult dealing daily with struggles of maturity, it’s also served as a place of retreat, refocus and solitude.

I begin getting that itch for the “The Lake,” otherwise known as Isle ‘O Dreams, on the incredibly Norse-sounding lake Bad Axe, somewhere around March and April.

I’ve described the place several times, but I’ll do it again just to set the tone.

The drive to the Twin Cities is marked by expectation and anticipation. We, my girlfriend and I, know it’s the first of two significant gateways on the way north.

This first gateway, slogged down with endless amounts of traffic, construction and general big city tomfoolery, is almost a litmus test of sorts, asking us at every car passed and sometimes simultaneously saluted depending on the occasion, is this worth it.

By the time we’ve battled through delays and headaches to reach Anoka on Highway 169 or as I like to call it The Devil’s Road, we’ve answered yes — a thousand times yes. We’re cruising by this point and once we hit Milaca, the road’s scenery, which has largely consisted of urban eyesore, gives way to more trees and lakes.

We’re at Onamia now, speeding toward Mille Lacs Lake of which we will hug around the western coastline until we reach a fork-in-the-road called Garrison. It’s more than that, but it marks a departure from Hwy. 169 and sends us west into Brainerd, the second gateway, because here it means we’ve seemingly left Austin behind. Not that I don’t like you people, but this place has a feeling of the past and it means we’re nearing a second home of sorts, even it it is only for a week.

Weaving through Brainerd, then Baxter, we’re on the way north again through one of the most scenic parts of the drive that takes us through the fun-to-say Nisswa (go ahead, say it — Nisssswwwaaaa), then Pequot Lakes, Pine River and eventually to Hackensack.

Just a ways outside of Hackensack, we turn west again, taking a winding road through trees, lakes and streams until we come in to the south end of Akeley. Akeley has a giant Paul Bunyan statue with a downward stretched hand that you can sit in if you want. I’m not sure why I mention this no more than I’m not sure why I haven’t sat in the hand. It seems almost expected that you should and yet I haven’t. I’m not sure if I’m proud of myself or disappointed in myself.

Now we’re in the homestretch with a stop in Dorset to pick up other supplies of the alcoholic variety before making the final run into the resort.

By this time I’m feeling at home. Everything feels familiar and safe and not work. It feels like vacation and once I roam into the resort, situated on a peninsula pointing into the lake like a giant finger marking you as “Here.”

And here is where the best part of this comes in. There is very little hope of the real world reaching me if I don’t want it to. Literally, there is like two spots on the peninsula where there is even the tiniest cellphone reception. Granted I could park on the resort’s Wi-Fi, but why?

This is vacation. No phone, very little contact and loons — besides me of course.

The only time this week is ruined is at 7 a.m. on the following Saturday when we are packing the car to leave.

The drive home is ponderous, long and exhausting because I’m coming back to cornfields and no offense to you farmers, but corn hardly stacks up to pine trees.

So, I bid thee farewell for the week and will see you on the other side and as my friend Bilbo Baggins reminds us, “Roads go ever ever on, over rock and under tree …”

I’m off to Rivendell.