Venus reigns over the morning sky this month. The queen of planets rises two and a half hours ahead of the sun on July 1, with its lead growing to three hours by the 31st—thanks almost entirely to the sun rising about half an hour later by the end of the month. 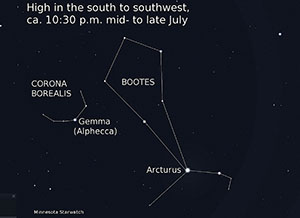 In the second week of July, go out before the sky starts to lighten and watch the V-shaped face of Taurus, the bull, graze Venus as it sweeps by the planet over the course of the week. Aldebaran, Taurus’s brightest star, marks the eye of the bull, but on the 12th Venus poses as the celestial bovine’s second eye. On the 20th, a waning crescent moon visits Venus—always a pretty sight.

Jupiter comes out in the southwest at nightfall, moving lower and more westward as the month goes by. On the 28th it, too, gets a moon visit, but from a thick waxing crescent. Saturn also comes out at nightfall, in the south between the Teapot of Sagittarius, to the east, and sinuous Scorpius, to the west. Saturn, with its golden hue, makes a nice contrast with the gigantic red star Antares, the heart of Scorpius. And don’t miss the graceful Teaspoon of stars hanging over the handle of the Teapot.

Look high in the south to southwest for kite-shaped Bootes, the herdsman, anchored by brilliant Arcturus. Just east of Bootes hangs Corona Borealis, the northern crown, ornamented by Gemma (or Alphecca), its brightest star. If you have a star chart, try finding Libra, the scales, just west of Scorpius; and Ophiuchus, the snake handler, above Saturn and Antares. If you venture out before midnight, try to go between the 14th and the 27th or 28th, when interference from the moon will be absent or minimal.

On July 3, Earth reaches aphelion, the most distant point from the sun in our orbit; at that moment the sun will be 94.5 million miles away. Earth moves most slowly in its orbit around the time of aphelion, and since it comes in the middle of the northern spring-to-summer stretch, it gives us in the Northern Hemisphere a few more days in our spring and summer than what our friends in the Southern Hemisphere get.

July’s full moon rises the evening of the 8th, less than three hours before reaching perfect fullness at 11:07 p.m. Algonquin Indians called this the full buck moon, for the sprouting antlers on buck deer, or the full thunder moon, as thunderstorm season is now in full force.

It can be bittersweet to come across our legends. As I stood in a packed Mears Park in downtown St.... read more