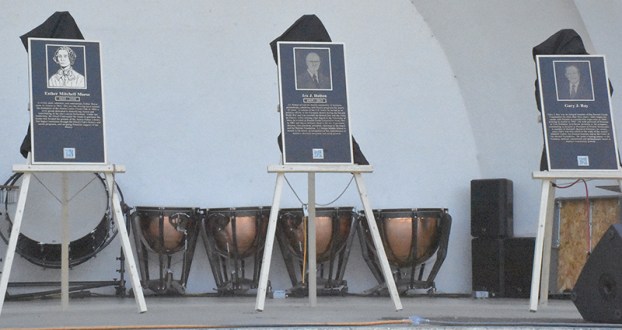 The three newest Pillars of the City, Esther Morse, Ira Holton and Gary Ray, were unveiled on Tuesday. Photos by Michael Stoll/ mike.stoll@austindailyherald.com

New Pillars of the City are Holton, Ray and Morse

The newest three members of the Pillars of the City were unveiled on Tuesday amidst the bustling activity at Bandshell Park.

A crowd gathered to watch as members of the Pillars of the City Committee and Mayor Tom Stiehm made the big reveal. 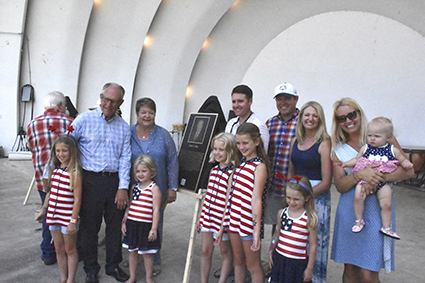 Gary J. Ray (second from left) poses with his family at the unveiling of his pillar. Ray was one of three new individuals to be named “Pillars of the City” on Tuesday.

Ray was an integral member of the Hormel Foods Corporation for more than 40 years, arriving in Austin in 1980. He held positions of Director to Vice President of different divisions in the company, culminating in his post as President of Protein Businesses. A member of Hormel’s Board of Directors for 20 years, he was also active in the work of the Austin Medical Center, the Hormel Institute and as the Chair of the Hormel Foundation.

He made a lasting impact in the business, medical, educational and philanthropic facets of Austin’s community growth.

Ray was on hand to witness the unveiling.

“It’s a real honor to be selected,” he said. “There are so many people in this community that need to have their face on those pillars too because this is really a community that works together in trying to accomplish things.” 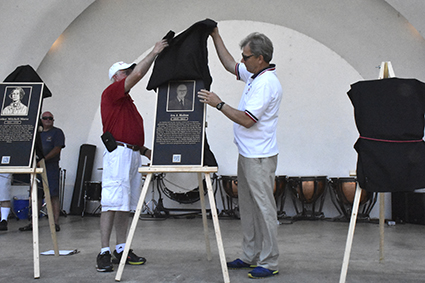 The newest Pillars of the CIty were unveiled on Tuesday.

Holton (Aug. 16, 1919 – April 11, 2012) was originally from Cedar Rapids, Iowa, but served the Austin community in business, philanthropy, education and literary programs for nearly 65 years. He worked at Hormel Foods Corp. from 1947 to 1983, serving as attorney, head of the law department, director, vice president, president and chairman of the board. He also served on the Hormel Foundation. I.J. Holton Middle School is named in his honor in recognition of his contributions to Austin’s education programs and social growth. 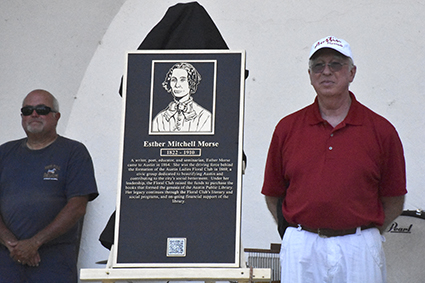 Pillars of the CIty Committee Chairman Steve Kime (right) stands next to the plaque for Esther Mitchell Morse, the first woman to be named a “Pillar of the CIty.”

Morse (June 3, 1822 – Sept. 30, 1910) was born in Norway, Maine, and came to Austin in 1864. She was a writer, poet, educator, seminarian and the driving force behind the formation of the Austin Ladies Floral Club in 1869. Under her leadership, the Floral Club raised the funds to purchase the books that formed the genesis of the Austin Public Library. Her legacy continues through the Floral Club’s literary and social programs and on-going financial support of the library.

The nine-member Pillars of the City Committee chose these three individuals from 33 nominations last year. After selecting them, the committee commissioned the plaques and researched and wrote the biographies for the chosen individuals.

In the coming days, the plaques will be hanged on the floodwall, joining the five plaques revealed last year.

“I’m anxious to see those plaques displayed on the floodwall,” Kime said. “I think it truly does tell a story about Austin and I encourage folks to take a look and learn all about it.”