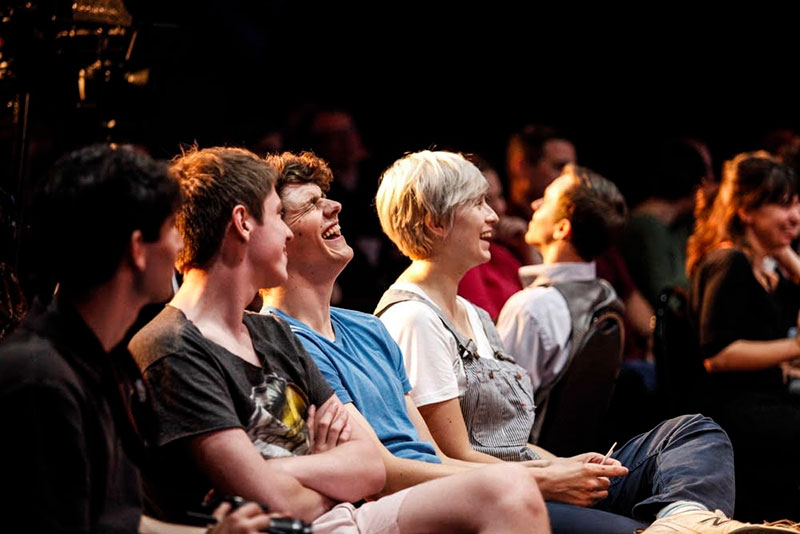 Political talk shows like “Last Week Tonight” with John Oliver and “The Daily Show” with Trevor Noah are immensely popular for their ability to satirize and analyze the news. A new show in Minneapolis is hoping to do the same, on a local level. It’s called “Minnesota Tonight.”

“Let’s get right into it,” host Jonathan Gershberg said to the audience during a taping last Wednesday at Brave New Workshop in Minneapolis. “Amazon has begun busing employees from Minneapolis to its new shipping center in Shakopee, Minn. The bus is only a temporary measure, say Amazon officials. Starting in 2018, all employees will be delivered by drone.”

Gershberg, who is also executive producer, is 25 years old. He began watching “The Daily Show” in middle school with his parents. Later, as a student at Macalester, he started doing standup and improv comedy, thinking that someday he might land a role on a similar national show.

“Minnesota Tonight” is recorded in front of a live audience once a month. Wednesday’s performance had everything from a critical look at the Minnesota state flag and cuts in funding for food assistance programs to an in-depth report on the recent measles outbreak in the Somali community. That report was prepared by “Minnesota Tonight” director Mustafa Hassan:

“What we have here is a group that is so focused on making money off of exploiting an immigrant community that has just started to flourish, and a community that hasn’t fully realized you can’t trust ALL rich white people,” he said.

“Minnesota Tonight” started in 2015 with four people. Now it boasts a staff of 26 dedicated volunteers, 15 of whom are writers. Gershberg said that while other political satire shows skewer the big stories of the day, “A lot of our show involves us presenting new information that people might not have known, or might not have been as plugged into local news as we and our writing and research staff are.”

To understand just how passionate the show creators are about their work, just look at producer Sally Foster — specifically, her left forearm:

“This is a tattoo of Abraham Lincoln, and the quotation around it is that ‘ballots are stronger than bullets.’ I have Benjamin Franklin’s 13 Virtues and the Liberty Bell on my arm … and my favorite Supreme Court justice quote on my chest.”

Such unabashed wonkiness, combined with good humor, appealed to Wednesday’s audience of 100 or so. Brother-sister duo Brianne and Michael Wegter said they had a fabulous time.

Brianne added, “I love that it’s bringing up relevant issues in our state in a humorous way. … I really particularly liked the section on vaccinations, and how it’s really targeting the Somali community — I think every Minnesotan needs to hear about it and fight back.”

While taping for television requires some starts, stops and occasional retakes, the audience didn’t seem to mind.

Like other political satire shows, “Minnesota Tonight” interviews a featured guest; this month it was a rep from Finnegans Beer, a local brewery whose proceeds go toward stocking food shelves. There’s also a musical act; this time around, vocalist Maria Isa and her band performed three sets throughout the two-hour show.

Gershberg said that producing “Minnesota Tonight” is a way to combine his love of comedy with his desire to do good in the world. “I sincerely hope and believe that a satirical show on a local scale can do that,” he said.

The next taping of “Minnesota Tonight” is set for Wednesday, July 26. You can catch previous shows and clips on the show’s YouTube channel: www.youtube.com/watch?v=QcPxIUpiv68.