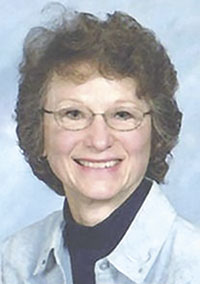 Lorna Marie Schmeling, 73, formerly of Coon Rapids, Minnesota, and recently from the Waters on Mayowood in Rochester, Minnesota, passed away at Homestead Hospice in Owatonna, Minnesota, on June 30, 2017, after a three-year battle with cancer.

Lorna was born on Nov. 13, 1943, the daughter of Glenn and Esther (Kording) Schmeling in Rochester. She graduated from Hayfield (Minnesota) High School.

Lorna enjoyed traveling, bowling, sewing, music and was a Twins Fan. Above everything else was her love of family

Visitation will be 5 to 7 p.m. Wednesday, July 5, 2017, at the Czaplewski Family Funeral Home, 501  Second St. NW in Hayfield and one hour before the service at the church on Thursday.

The funeral service will be 1:30 pm. Thursday, July 6, 2017 at Trinity Lutheran Church, 104 First St. SE in Hayfield with the Rev. Paul Hauschild officiating. Interment will be in Fairview Cemetery in Hayfield.

In lieu of flowers the family prefers memorials to Homestead Hospice in Owatonna, Mayo Hospice in Rochester or donor’s choice.