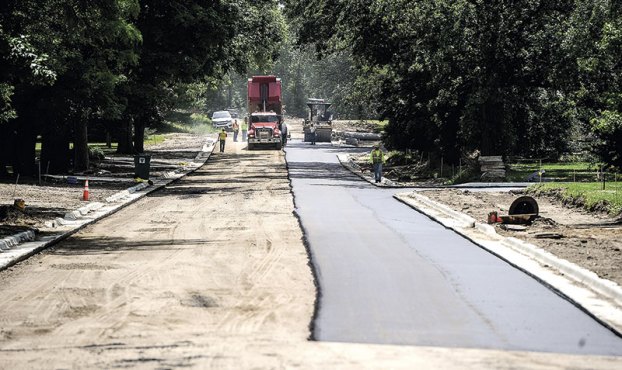 Asphalt is put down on Fourth Drive Southeast in June. While the half-cent sales tax doesn’t go into effect until Jan. 1, 2018, the money could go to helping fund projects. Herald file photos

The board unanimously agreed Tuesday to keep the sales tax approved last year while unanimously rejecting options to increase the wheelage tax from $10 to $20 and to add an aggregate tax.

The sometimes-controversial tax will raise about $1.5 million a year to help meet an estimated $6 million a year shortfall for road and bridge funding. The wheelage tax increase and aggregate tax would have raised about $370,000 and $60,000 a year, respectively.

Despite unanimous support for the sales tax, commissioners reiterated their displeasure with the Legislature for offering the sales tax option to counties while failing to come up with adequate funding at the state level, despite pleas from Mower County and others to take more substantial action.

“Just because someone else doesn’t do their job, doesn’t make it that we can’t do ours,” board Chairman Tim Gabrielson said.

The board again heard divided comments from a few members of the public, with business leaders speaking against the tax and rural residents supporting it.

Roger Weness of Adams talked of driving gravel roads to avoid the county’s poor paved roads, and he urged the county to take action after the state passed the buck.

“They’ve got a can in front of them, and they seem to kick it down the road every year,” he said of the state.

But Chamber of Commerce Executive Director Sandy Forstner again argued raising the sales tax to 7.37 cents — of that, 6.875 cents is a state sales tax and the remaining half-cent is levied by the city — would hurt local businesses and isn’t a fair tax.

“I fail to see the connection between sales tax and roads and bridges,” Forstner said.

John Rhyther of Lansing Township agreed, asking if the board had looked at finding ways to tax those most hurting the roads: those hauling heavy equipment and semis.

However, the board pointed out that few taxes are truly fair in this way. For example, Commissioner Tony Bennett said few of the taxes he pays through his business, Old 218, go toward any relative issues.

“There’s no such thing as fairness in taxes,” he said.

“If all this new money is needed for roads and bridges, they should look at that as well, because it least it would be transparent, at least you would be accountable for your actions, rather than snipping at people a half cent at a time,” he said.

However, Commissioner Polly Glynn noted Rochester has a higher sales tax than Austin and it doesn’t deter shoppers, adding they rarely check a city’s taxes before visiting it for shopping.

“I don’t see anybody not going there to shop because of that,” she said.

Glynn, like the rest of the board, said she’d looked through all the options and decided the sales tax was the best route, arguing there’s rarely direct connections between taxes and what they fund.

“I’ve wracked my brain trying to think of other ways that we can bring money in to pay for these roads, and nobody else has any suggestions either,” she said.

She noted the half-cent sales tax can only go for specific, designated road and bridge projects.

Gabrielson said the board had to take action and blamed the issue on out-of-control spending at the state.

Commissioner Jerry Reinartz spoke against the tax throughout discussions since it first came up a few years ago, and he’s called for the state to come up with more money, especially when the state had a surplus heading into its 2017 session. However, he too voted in favor, saying there’s no way around this.

“Going forward, short of raising our levy, I don’t know what else we can do,” he said. 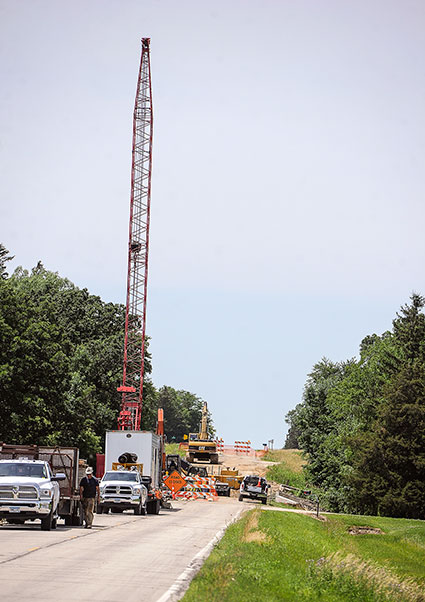 A bridge on Highway 57, north of Brownsdale, was one of several projects being worked on throughout the county.

While Commissioner Mike Ankeny agreed points made by the public that the tax isn’t a great option for road and bridge funding, but he said the board has few options to choose from.

“It’s unfortunate; it’s tough decisions to make,” Ankeny said. “I’m in the retail business, too. I don’t like to see a higher sales tax.”

“We’ve begged our legislators to do something,” Ankeny said.

Ankeny and Reinartz both said they’d rescind the motion, should the state secure adequate road and bridge funding in future years.

The board originally approved the half-cent sales tax last year with the intention of pressing the Legislature for more funding. The end result was disappointing: the county will see $229,940 next year, but 40 percent must be used for maintenance, leaving the county with $137,964 for road or bridge construction.

The board already dedicated $400,000 a year in wind production tax revenue, $137,964 in the legislative funds and about $3.3 million would come from basic construction allotments.

Brian Arden Anderson was a lost man, his sister Vicki will tell you, a victim of tragic circumstances few ever... read more