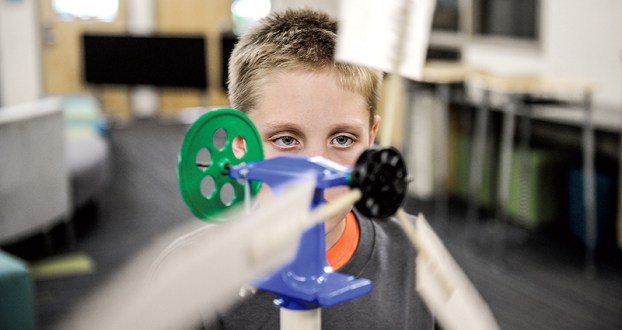 Nick Iverson watches his wind turbine run as he tries to figure out a problem during a Project E3 demonstration Wednesday at I.J. Holton Intermediate School. Photos by Eric Johnson/photodesk@austindailyherald.com

Aggie McKichan stood by a series of propellers attached to rotors; some were situated so the blades turned horizontally and some, vertically.

Next to the spinning objects were fans; together, they demonstrated the creation of electricity generated in the rotation of the blades — in effect, wind turbines.

The 11-year-old was one of over 70 fourth to sixth graders who gathered this year to study energy conservation as part of the E3 Program. “E3” stands for “Engineering and Environmental Sciences for Everyone.” 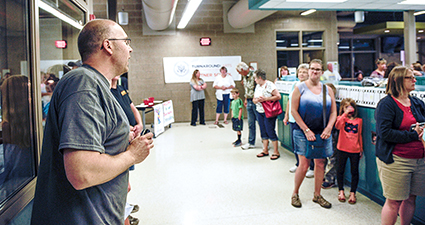 McKichan said the projects were fun and taught her a lot about energy savings, especially LED lights and other energy sources that could be used instead of natural gas.

Those demonstrations were part of an almost year-long conservation study. Students attended one Saturday a month from November to June, and then three and a half weeks in June and July. Students from Austin, Albert Lea and Hayfield-Brownsdale made up the group.

This year marks the end of the program’s three-year cycle. This year’s theme was energy conservation; last year’s was habitat conservation. The first year focused on water conservation. 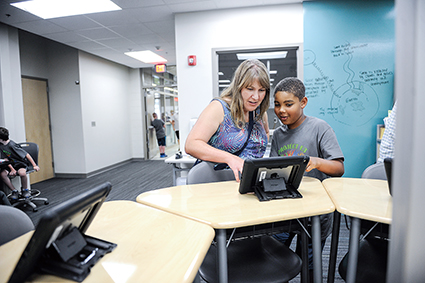 Gavin Brekke show his mom Lindsay Brekke a PSA of some of the demonstration on display at Project E3 Wednesday at I.J. Holton Intermediate School.

Program emphasis is on broadening student knowledge of conservation needs, but also students’ ability to work together to affect change. A variety of activities were planned as part of the summer get-together. Earlier this week, they visited the Jay C. Hormel Nature Center, studying geothermals and solar panels. said instructor Erin Johnson. They also toured the Austin Utilities.

The program provided a series of different hands-on projects and activities; on Wednesday, parents came to call and watch some of the demonstrations, experiments and videos done by the students. In one area, there was a project that measured temperature impact on illumination and its relationship to LED lights, according to Lydia Rojasbarrios, who will enter seventh grade next year.

She is a three-year veteran of the program. “I wanted to learn more, and it was fun,” she said. “I think about the environment more now; it’s important that we want to help conserve it.”

The demonstrations were as much fun as they were instructive: one was an engineering challenge that used gummy worms, toothpicks, a gum ball and a plate. Students were also asked to create a public service announcement about conservation needs, as well as a movie trailer about the same.

A wall nearby was filled with Post-it notes, written by students, and placed under the categories, “Engineering” “Environment” and “Everyone.” On each was an impression or recollection of something learned, but also how they felt working together.

“Working together, and how we related to each other, was an important part of the program, too,” Andersen said.

According to the program website, the program not only provides a mix of learning and fun, it also works to improve a student’s cumulative test scores.

For Mady Duenes, 11, the program not only showed her the power of working together, but what one person can do, too.

“I’ve learned that we have taken this beautiful work of art and turned it into something so bad,” she said, referring to the overuse or destruction of Earth’s resources.

Get out your cooking oil and make it hot, because the Hayfield Fire Department will host its annual Chicken Fry... read more