Brian Arden Anderson was a lost man, his sister Vicki will tell you, a victim of tragic circumstances few ever understood.

“People are so judgmental; it makes me so angry,” she said, struggling with tears.

Anderson, 55, died July 5. His body was found in Mill Pond in Austin. Preliminary findings indicate he drowned and suffered heart issues, but an official autopsy is being conducted. Results will not be known for several weeks. 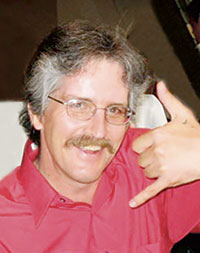 His death brought to an end an often-troubled life, shattered when Anderson was only 20.

Brian and a friend were shooting birds in a rural barn, near Dawson, Minnesota, where Brian grew up. Brian was happiest when he was hunting or fishing, said his mom, Bev.

“His friend took a shot, and the bullet ricocheted off the roof and it hit Brian in the head,” Bev said.

Bev said doctors removed a good part of his brain in his battle to live. He spent 52 days in the University of Minnesota hospitals.

“It was terrible, tragic,” she said. “You never return to ‘normal’ after that.”

His sister, Vicki Anderson, said her smart, funny brother, who was a popular student at Dawson-Boyd High School in his teen years, was now a man who had a hard time concentrating on eating a meal.

“You couldn’t be near a TV because it would distract him too much; he’d forget he was eating,” she said.

Prior to his accident, he worked at Land O’ Lakes in the Twin Cities. He was getting ready to take a new job, Vicki said, when he was felled by the accident. How much he would be able to do was left to physical therapy and prayers. Doctors cautioned the family that he might not walk again, or even be able to control his bladder. He lost his sense of smell, Vicki said.

For a time, he was able to work at Walmart. He also worked with a family friend as a handyman’s assistant. Work of any kind was difficult, however.

Over the years, Brian lived in a number of different apartments near his home and was in and out of treatment centers that served not only the chemically dependent, but the brain injured as well. He occasionally locked horns with the law — DWI, trespass, public nuisance among the charges.

Through it all, said Vicki, “he was such a nice guy; so kind. You could ask him about anything going on in the world, and he would know. he was a great guy with a great soul,” she added.

He came to Austin about six months ago, and lived with a couple, despite the early reports that said he was homeless. His folks said they were in contact with him, but sometimes, they could not get an answer at the home where he lived.

Eric Johnson, a bartender at The Bakery in Austin, said he met Brian when he came in the bar. The waitress was scared, and could not understand what Brian was saying, so she alerted Eric to help. It wasn’t unusual, he said, to see Brian in front of businesses, trying to bum cigarettes or picking half-smoked ones off the ground.

On that first meeting, Eric saw a well-kept man with longish hair and a beard. His persona was at odds with this looks, however. Lulls in conversation were broken by bursts of speech, some of it unintelligible. Brian called himself “The Black Widow.” Johnson saw him only twice, but the difference between the two meetings was significant, he said.

“It was another man I had seen before,” Johnson said. “He acted perfectly normal [the second time].” He was shocked when he realized that it was Brian whose body was found in the lake.

Others posted comments on Johnson’s Facebook page right after Brian’s death, saying how sweet Brian was, and how they would lend him money on occasion. Johnson said he had little information about who Brian was over the years, but he wondered if he had been a veteran of some conflict.

In some ways, it seems, he was an embattled veteran who fought internal conflicts.

A memorial service was held Tuesday in Dawson, Minnesota. One of the condolences left on the funeral home website said, “Brian touched many hearts, in the brief time he was here in Austin. The last time I talked with him, I asked if there was anything else I could do for him … in a quiet voice he said please pray for me. He touched me in a way I can’t explain. My condolences to you, and the family.”

Vicki had a dream, two nights after Brian died, in which Brian was in lying in a casket, when his eyes opened.

Still, she said, she grieves for the life he had to endure.

“I am a nurse and I have seen a lot of brain injury,” she said, voice choked with tears. “People don’t understand what people like Brian have to go through. I personally think he was lost in this world. He never thought he belonged, or that he fit in anywhere. Deep down, he felt like nobody.”

Austin School Board members were assured Monday that students with unpaid lunch accounts were not subjected to the humiliation cited... read more