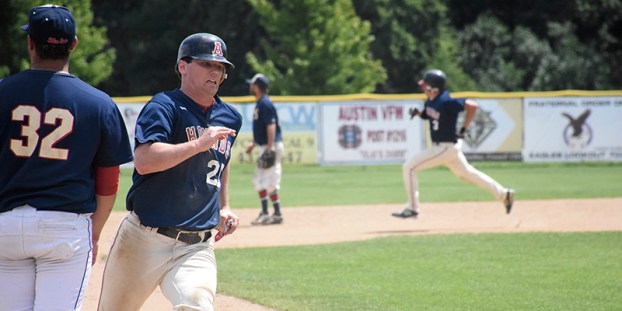 Josh Evans rounds third base for the Austin Greyhounds in a 9-1 win over the Austin Blue Sox in Marcusen Park Sunday. Rocky Hulne/sports@austindailyherald.com

Jack Dankert was introduced to the Blue-Sox-Greyhounds rivalry as a youngster and he made himself a part of it as a player on Sunday. Dankert had a big day at the plate as the Austin Greyhounds avenged an earlier loss to the Blue Sox to win 9-1 in Marcusen Park.

Dankert reached base in all five of his plate appearances as he went three-for-three with a pair of doubles and three RBIs. Dankert gave Austin a 4-1 lead with an RBI single in the top of the seventh and he smacked a two-run double down the right field line in the ninth to put the game out of reach. 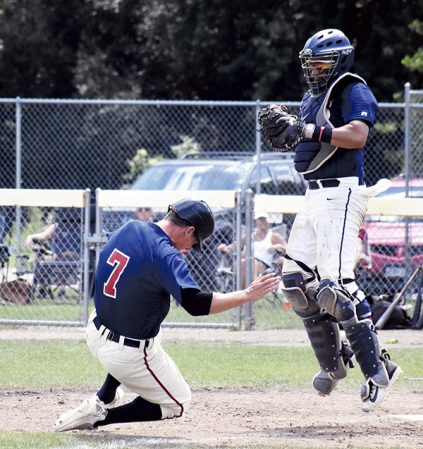 Austin Blue Sox catcher Nestor Jimenez comes down with a throw to home plate as Dan Bollinberg slides for the Greyhounds in Marcusen Park Sunday. Bollingberg was tagged out on the play. Rocky Hulne/sports@austindailyherald.com

“When you’re a kid you always watch the Hounds and Blue Sox play and those were intense games. It’s fun to be a part of it and it’s fun to play well,” Dankert said. “I would play baseball all year if I could. I really like hockey too, but it’s always fun to play baseball.”

Nels Nelson picked up the mound win for the Hounds as he allowed just one earned run in six innings. Zach Schara pitched three scoreless innings in relief. 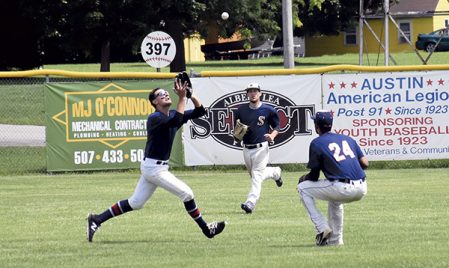 The Hounds took the lead for good in the top of the sixth when Dan Bollingberg singled in a run to go up 2-1.

The Hounds scored five runs in the top of the ninth as they racked up six of their 16 hits in that frame. Hounds manager Matt Cano was pleased with how the team finished the game.

“We left the bases loaded a couple of times, so it was nice to finally be able to get that big hit [from Jack],” Cano said. “We’ve had quite a few Legion guys play who have stepped up and helped us this summer. It gives them a chance to go against a higher level of pitching and hitting.” 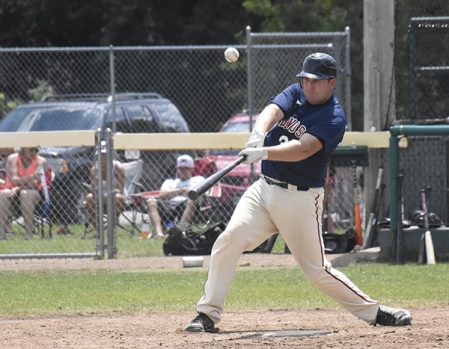 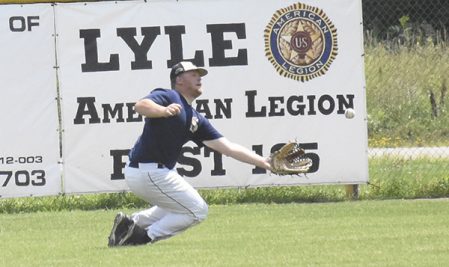 The Austin U16 softball team finished 12th in the silver bracket at the NAFA National Softball Tournament in Shoreview. Austin... read more