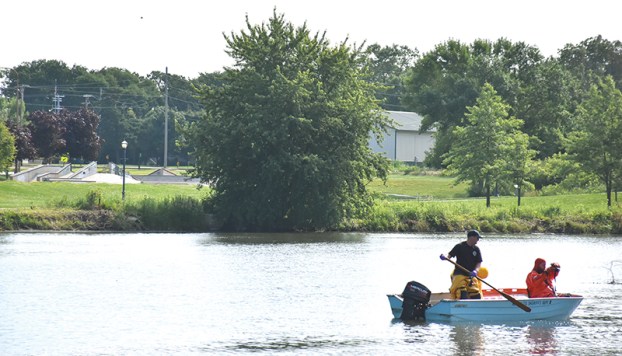 Police have identified Brian Arden Anderson, 55, as the man found dead in Mill Pond on Wednesday.

No foul play is suspected in the death, and a preliminary autopsy report lists a history of heart issues and drowning as causes of death, according to Austin Police Chief Brian Krueger.

The Austin Police Department and Austin Fire Department responded to a call at 8:02 a.m. after two people walking on the trail spotted something in the water. Officers immediately realized it was a body about 60 feet into the water just northeast of Austin Public Library.

Police cordoned off the trail, which runs between the library and Mill Pond, but many walkers and runners stopped to watch the scene as the body was visible.

More than a dozen emergency responders were on scene. 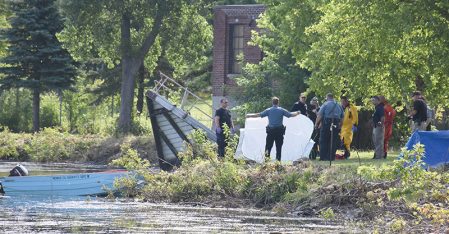 A police officer holds up a tarp to shield a body just removed from Mill Pond behind Austin Public Library around 9:40 a.m. Wednesday. Jason Schoonover/jason.schoonover@austindailyherald.com

After investigating the scene, taking photos and collecting evidence, emergency responders in wet suits took a boat onto the water and removed the body by about 9:40 a.m.

An officer on scene recognized the body as Anderson, who was fully dressed.

Anderson was taken for an autopsy at Southern Minnesota Regional Medical Examiner’s Office – Mayo Clinic, where his identity was confirmed.

Preliminary findings indicate “coronary artery traumatic history” and drowning as the cause of death.

Police believe Anderson’s body had been in the pond overnight, though they couldn’t pinpoint a time of death.

It will take six to eight weeks for a toxicology report to be completed; however, officers searched the entire perimeter of Mill Pond and found no evidence of foul play or potential drug use.

Krueger said police and firefighters worked to be respectful of Anderson, due to the public nature of the scene. They put tarps up to obscure the scene from view.

—Mike Stoll contributed to this report. 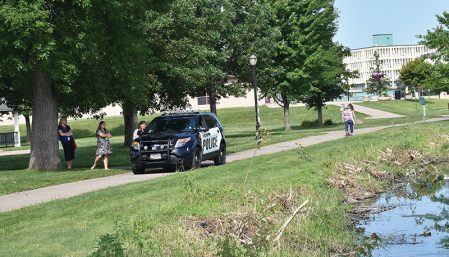 Passersby chat with a police officer and watch the scene as law enforcement retrieves a body from Mill Pond behind Austin Public Library on Wednesday morning. Jason Schoonover/jason.schoonover@austindailyherald.com

According to a state auditor’s report, the Austin Police Department had a net proceed of $33,465 from criminal forfeitures in... read more