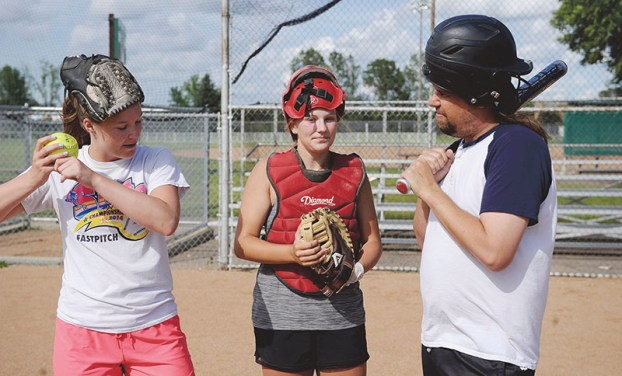 Okay, you’re just going to have to trust me when I say this was serious.

By the time I stepped into the batter’s box at Todd Park, facing down Austin pitcher Tori Gardner with batter-mate Jenna Braaten behind me, I had a horrible thought.

“Oh, God, I am going to be owned by a teenager, on video and in pictures.”

Okay, it wasn’t horrifying, but it was a concern for the simple fact that during the high school and summer seasons I spend a lot of time with these girls in the dugout. It’s really the only place to shoot photos from, given the shorter dimensions and tighter fence restrictions.

And should I look terrible and strike out in some ridiculous fashion, they would never let me forget it.

Don’t by any means get me wrong. They are a wonderful group of girls. They are fun, friendly and easy to talk to, and it’s because of all those things that they would remember.

But first, some context.

Daily Herald sports editor Rocky Hulne and I are hoping to start a series where we challenge high school athletes in serious competition to not only see how we would fare in that situation — you know, because we’re older and out of shape — but to also demonstrate just how hard and serious they take their sport.

So we began talking and decided that softball would be a great start, in large part — if I am to be honest — because Rocky doubted me when I once claimed to be able to hit one of these pitches.

I can understand his doubt, but I’ve done it before, so I had every thought that I could do it again. After some thought we decided we would feature Tori and Jenna, who we both know would take it seriously.

Of course it’s hard to back that up when one of our video segments featured the three of us with me wearing a batting helmet backwards, Jenna with her catcher’s helmet backwards and Tori wearing her glove on her head — backwards.

Still, I explained that we need the effort to be serious, otherwise it’s really hard to show what they can do. This isn’t just about us having fun, or showing off what we might be able to do. It’s showcasing the talent of our area athletes.

I won’t go into everything, because I need to save a lot for the story that will run with video and pictures, but I didn’t do as bad as I thought. Four hits out of 10-pitch count. I felt vindicated.

But what this experience did overall was showcase just how much fun I have with my job when I get to work with kids like Tori and Jenna. Both girls embraced the exercise, making it all worthwhile.

The Austin Daily Herald isn’t on the big stage where we see these athletes maybe once or twice a year, usually during tournament settings. It’s not uncommon to not only see these kids a couple of times during the week, but to see them outside of the school and a large majority of them we cover are those kind of personalities that will actively engage you as you pass.

Social media has helped a lot in this regard, but it doesn’t take away from just how fun these student athletes are to work with. Let’s be honest, this little project doesn’t go as far if neither Tori or Jenna aren’t actively engaged. We’ve seen it far too many times in other circumstances where the kids aren’t fully engaged and it just seems awkward.

But they were engaged; and not only those two, but many of their teammates were as well. Jordyn McCormack even offered me encouragement from where she was perched at shortstop with Katelyn Murphy at second. “You’ve got one more chance,” referring to what she called a dinger earlier in the afternoon. I suppose she could have been mocking me, but I choose to think it was encouragement.

At any rate, a journalist can work with a kid who’s great, good or just tries hard and that’s fine. But if we get feedback in the form of laughter, joking, or just straight interaction then it makes it more fun for us.

Listen, we want to have fun with our job as much as anybody and kids like Tori, Jenna, Jordyn and a whole host of others, not only in Austin, but the surrounding area, just make it that much more fun.

It speaks to their character, really, and the more characters I have in my life and job, the better. And in the end I heard the thing I wanted to hear the most — that they had fun, too, because this project just doesn’t work if they aren’t having fun.

So with that, Rocky and I just want to put it out there that we hope to kick off this new series and we want you — the student athletes — to challenge us. Let us know what you want to see. Basketball, football, hockey, track … the sky’s the limit. We won’t be able to do everything, but we will consider everything.

What we’re looking for are athletes who are going to treat it as a real experience. We’ll have fun, but we also need to know what you do.

Have a great weekend and we’ll see you on the field of battle.