Call them young guns; Eighth grade duo has given state-bound Hayfield a lift 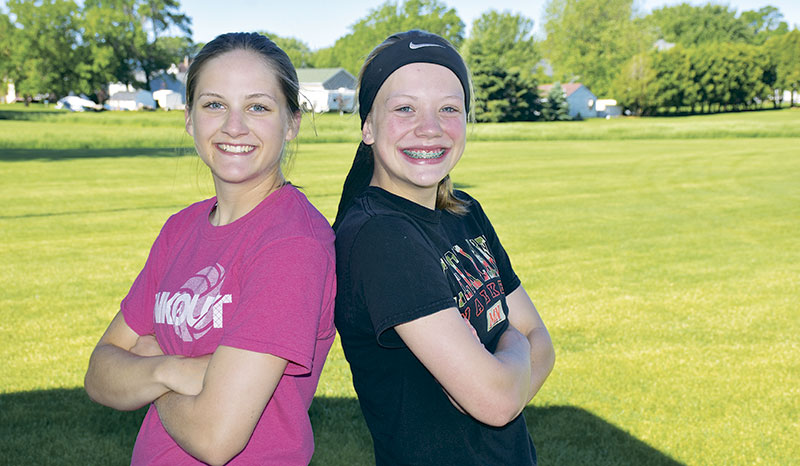 Hayfield eighth graders Jenna Jacobsen (left) and Caitlyn Hendrickson (right) have stepped up their game for the Hayfield softball team this season. The Vikings will open play in the Minnesota Class A state softball tournament vs. Kimball at 1 p.m. Thursday in Mankato. Rocky Hulne/sports@austindailyherald.com

HAYFIELD —The obvious reason that the Hayfield softball team will compete in its third straight Minnesota Class A state softball tournament this week is that the Vikings are loaded with a huge junior class that features plenty of solid hitters. The more subtle reason the Vikings have found success this spring is the emergence of two eighth graders who have played well beyond their grade level this season.

“They’ve both played a lot of ball and they understand the game,” Hayfield head coach Jana Wagner said of the duo. “They don’t get too uptight about anything and they know the defense is there behind them.”

Hendrickson, who has picked up her game in the postseason, is 5-1 overall with an ERA of 3.83 and Jacobsen is hitting .434 with 23 RBIs. Jacobsen also has thrown out 12 runners while maintaining a fielding percentage of 98.8 behind the plate. Hendrickson struggled with nerves earlier in the season, but she said she’s felt much more confident in the postseason due to the support of Jacobsen and the veterans on the team.

“I don’t think there’s been any one of the juniors who have said anything to make us feel younger or less experienced,” Hendrickson said. “They’re all very helping. Especially, Carrie [Rutledge]. I’m really close with Carrie and she helps me with everything and I know Jenna’s super close with Kyal and that helps.” 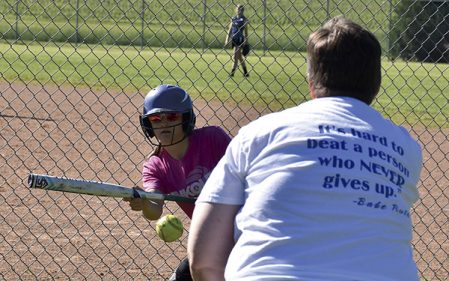 Rutledge, who has been a three-sport athlete since she was a freshman, is hitting .536 with five doubles, four triples, two homers and 25 RBIs and she’s played solid at shortstop for the Vikings. Rutledge has seen Hendrickson and Jacobsen make big strides this season.

“They have improved a bunch,” Rutledge said. “Caitlyn is so calm and confident and Jenna stops just about everything. She’s got a cannon for an arm. They are great and they’ve helped the team a bunch this year.”

Hendrickson has also received some guidance from Jacie Gustine, who is Hayfield’s other pitcher. Gustine has played outfield in the postseason, but she was glad to lend a helping hand to Hendrickson.

“I had a little adjusting to do this year, but I trust Caitlyn in the circle and I think think she can do the job,” Gustine said. “I pretty much taught [Caitlyn] this year all of the things Jackie [Sanvick] taught me last year, like how to cover and mix your pitches. I try to help her the best I can.”

Jacobsen, who has caught for Hendrickson for the last five years, saw some playing time in the state tournament last season, so she knows what to expect on the big stage.

“It’s very intense,” Jacobsen said. “The games are very close and you need to bring your ‘A’ game. I think for how much we’ve played together and how well we’ve been playing lately, we can work together and do well.”

Hayfield has gone 0-4 in the last two state tournaments and the team is making it a goal to win at least one game and make it to Friday’s round this season. The Vikings (18-6 overall) are seeded fifth and they will open play against No. 4 Kimball (19-3 overall) 1 p.m. in Caswell Park in North Mankato Thursday. Win or lose, Hayfield will play again at 7 p.m. 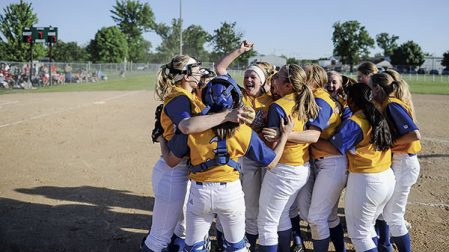 Rutledge said Hayfield is used to the feeling of getting to state and now the team wants to know what it feels like to win at state.

“It’s still the same feeling,” Rutlledge said. “It’s still fun going, but this year we just want to win a game. It would be nice to continue on to Friday. When we go up there we all just want to have fun and I don’t think we put too much pressure on ourselves.”

Gustine said the nerves are out the window and the focus is solely on getting a victory.

“I think our nerves for the most part have gotten out of the way and we’re really determined to get a win,” Gustine said. “I think we’re mentally prepared to go out there and do it. We’re very hungry and we’re determined to go win.”